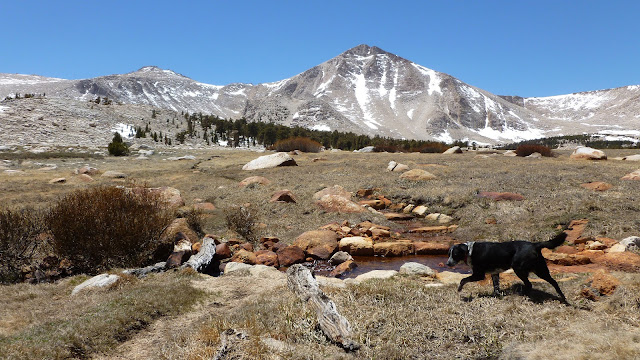 Last week I had the wonderful opportunity to get into the high country for a couple of days with a young friend, Kevin, and Django, the ultra-hound.  Most of the truly high country is off-limits to dogs because it lies within national parks.  Of course, if I have a long train of hooved thousand-pound beasts that will tear up any and all trails, crap and pee everywhere in vast quantities, that's okay.  But a hound that might chase a chipmunk or two?  Federal offense.  As Abbey said:  Resist much, obey little.  The bastards.  Still, there are some places where The Man has decided that his Best Friend is allowed to roam, and roam we did.  This was a hit-and-run operation:  Drive to the trail head Sunday night, hike in, set camp and climb the mountain featured above on Monday, camp in the back country Monday night, and hike back out on Tuesday.  We feel blessed to be able to do such an outing with so little expense and travel time.  Had we still lived in coastal northern California, this would have been impossible.  The nights were chilly but above freezing, the days bright, cool, and virtually bug free.  We only encountered a few gnats as we rounded a lake on the way to Cirque Peak featured above.  The whole trek felt like we were getting away with something, especially since we didn't see anyone except on the way in and the way out.  It was a fine kick off to the summer--and better conditions than we're likely to find until fall.  Note, however, the lack of snow cover.  The picture above is at over 11,000 ft.!

Kevin and Django heading out: 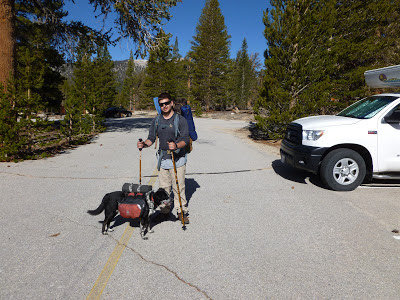 Django getting his phreak on: 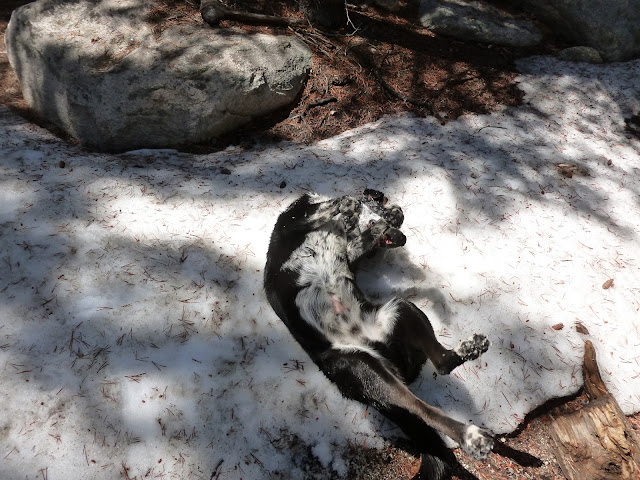 Perfect streams in the sun: 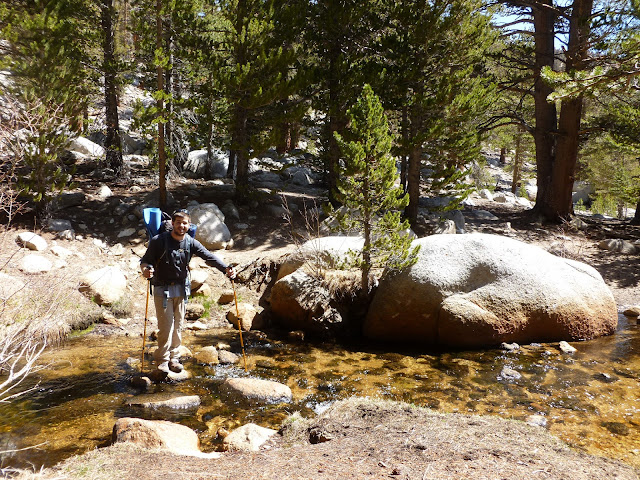 Hitting the trail, summit beyond: 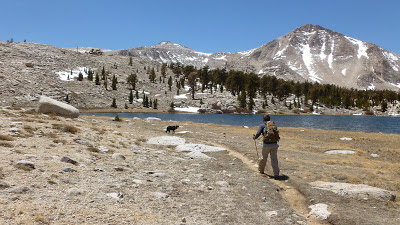 Lost in a wilderness of talus: 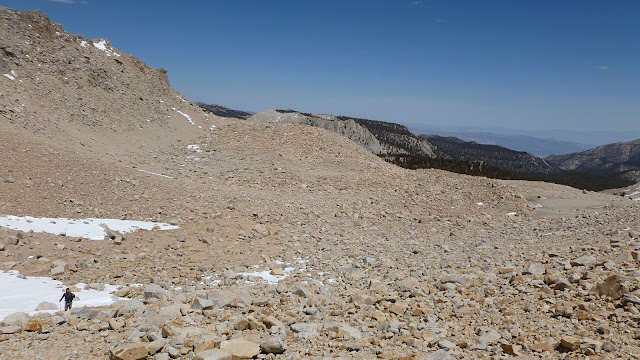 View to the west from the summit ridge: 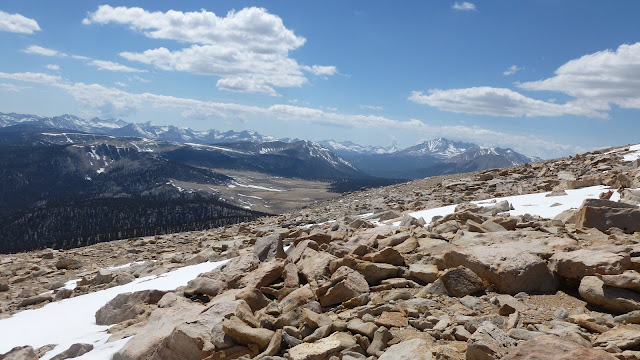 View to the north-east: 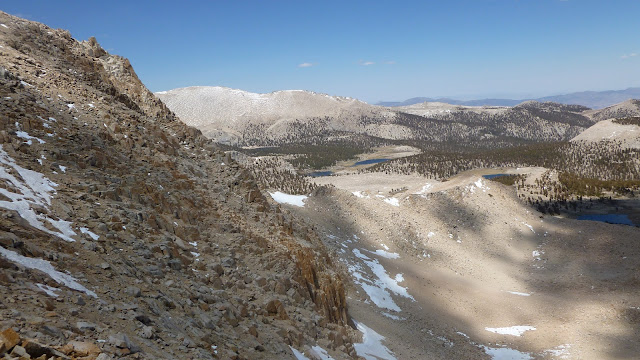 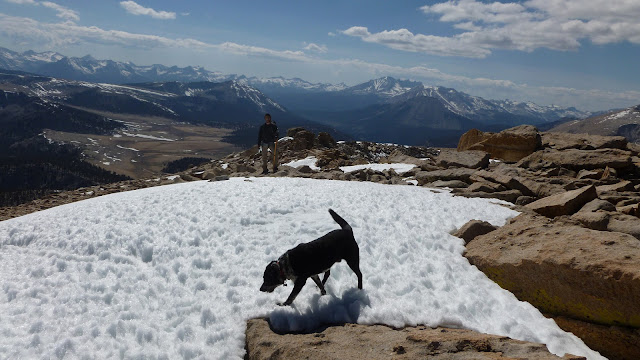 On top--too much cloud and back light: 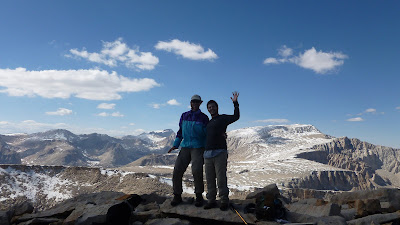 Mt. Langley is the big one, center; dark peak left of center, Mt. Whitney; Mt. Russel behind that to the right--fourteeners all: 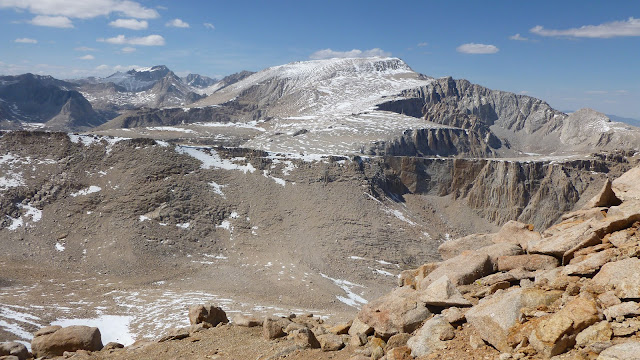 Kevin looking back up the horrors of the descent: 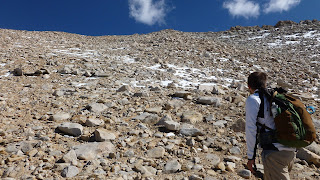 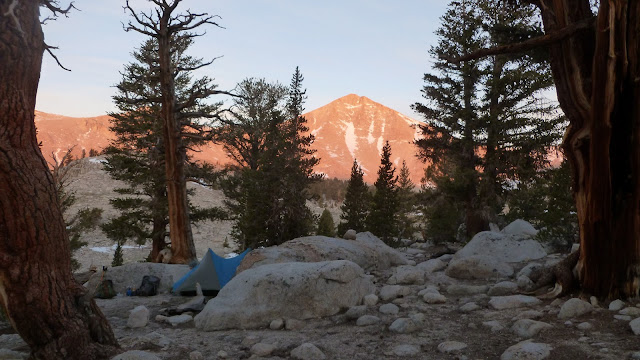 On the way back out, we were sorry to leave: 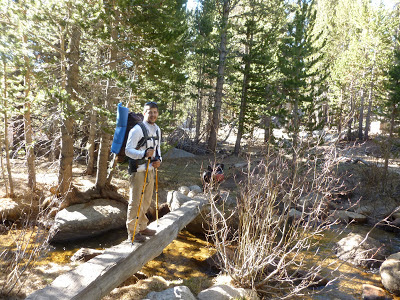 Now, Jodi and I are getting rig, rack and gear ready for another outing.  We'll be taking Kevin, an even younger lad, Max, and Django, of course, back into the high country north of Whitney then out to tackle some rocks in the eastern Sierras.  It should be a grand and challenging time.  Our original plans to scale Olancha have been cancelled due to the very dry year we've been having.  I was very concerned about finding water given our chosen route, and the fact that we are now only taking one car, so a shuttle wasn't in the cards.  We'll be heading into the Kearsarge Pass region--higher, colder, beautiful.  Stay tuned for more high peaks adventure.

I walk the line 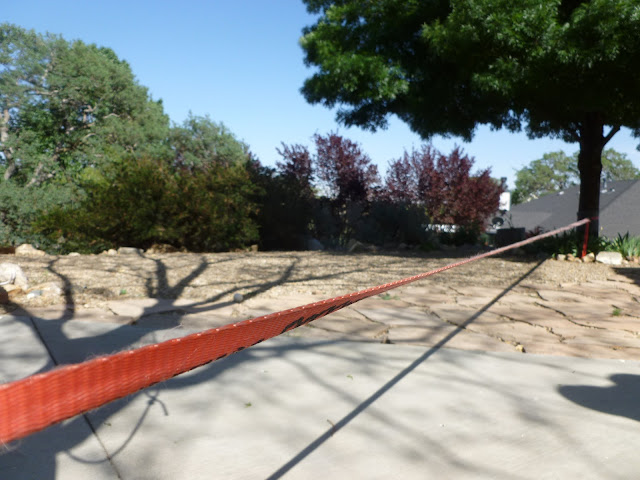 It is said that the road to enlightenment is as difficult to walk as the razor's edge.  While not exactly a razor, the balancing act that a so-called "slackline" requires presents ample difficulty and challenge.  I find it a most demanding master, a mirror for mind-body connection, a strip of nylon that cannot be fooled or faked or fudged.  You are either on the line or you are off.  Like rock climbing in many ways, the line is perfect Zen.  When the suitor is not centered, he cannot walk.  The line cannot be muscled.  Frustration and anger make the task even more difficult.  To achieve success, the student must let go of the desire to succeed.  Countless times I stepped up, wobbled drunkenly, and jumped back to the ground.  But then...but then there came a day when I could stand, one leg out, hands floating on the wind, the center there below me.  To step forward, to shift the weight, to move forward with the world shifting underneath, every cell and quantum of focus bent to the task was another thing altogether.  One day I did take that step, and another, and another.  And on March 12th, exactly one week after my 51st birthday, I traversed all thirty feet, each uncertain step a triumph, a staggering, wavering victory!  Oh, what a great joy that was.  A perfect little adventure played out in my back yard, never more than two feet above the ground.

My young friend, Trent, introduced me to this fiendish device during our winter trip to Joshua Tree.  He, by far the better athlete, jumped up and started spinning this way and that, already seemingly a master of this obscure art.  If he could do it, couldn't I?  Could this old dog learn a new trick?  I determined to learn this new dance.  For the first time in many years, I threw myself at something totally new and very difficult.  Indeed, I suspect that when most people jump on a slackline for the first time, they will think the deed impossible.  Only the proof that others do it gives you the courage to persist.  I had seen this done by some of the world's great climbers, and the line has been a pastime and training tool for climbers for decades.  Somehow it remained outside my radar.  Now I'm an addict, and every day I can, I put in time, even if only a few minutes.  In the morning between mouthfuls of cereal, I will swing into the realm of controlled disaster and teeter for a few moments, finding that place where the body, mind, and soul can connect.  I fall often, but when I'm warmed up, my body accustomed to the ridiculous demands, I can walk the line.  On a few occasions, I've walked right up and covered the whole distance.  More frequently, I fall off a couple of times until my recalcitrant muscles and inner ear submit to my will.  I find it toughens my mind and ability to focus, and after a session, I'm completely charged and feeling alive, which is the point. I'm now beginning to tackle the trick of turning around, a feat I've only managed to stick a few times.  My goal is to walk one way, turn around, and come back, a sixty foot journey that will no doubt take me weeks to complete.  Failure will be, has been my constant companion, but that is the essence of all great adventures.  If the outcome were certain, why begin?  The Zen speak of "beginner's mind."  What better way to find it than to begin an uncertain path?  All we can do is throw our hearts into the task and rejoice in the struggle. 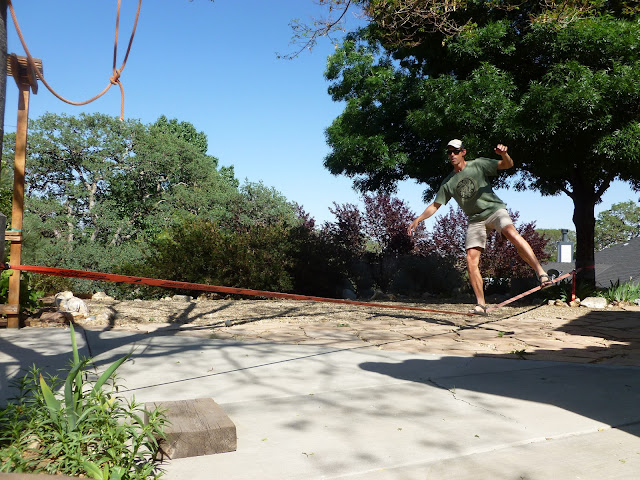 Posted by Scott Wayland at 10:05 PM No comments: