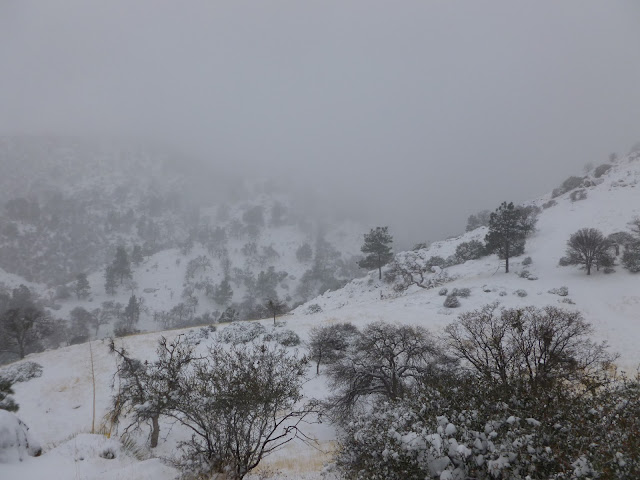 The biggest storm of the season and the best snow dump in several years has blanketed the Republic of Tehachistan in the heavy white stuff, about 8 to 9 inches at our compound elevation of precisely 4,000 ft.  The highway was closed, so travel to the salt mines--er college--was out of the question.  We got out early with Django for a slog through the hills, enjoying every minute of it.  I've been doing some chores that have been sitting around for ages, like fixing up my panniers that I use for commuting, and I'll be getting fully caught up on work I collected yesterday, but then I'll suffer after the weekend with a minor avalanche--pun intended--of backlog.  Oh well, live for the moment, rejoice in the gift of snow as ravens cut darkly through pale mist, trees set like dead nerves against the grey sky. 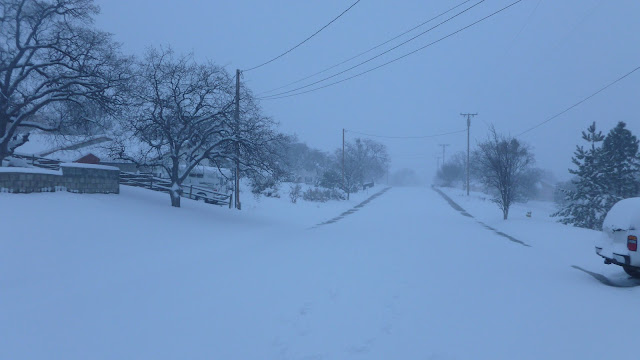 A rare sighting of the elusive ice bear: 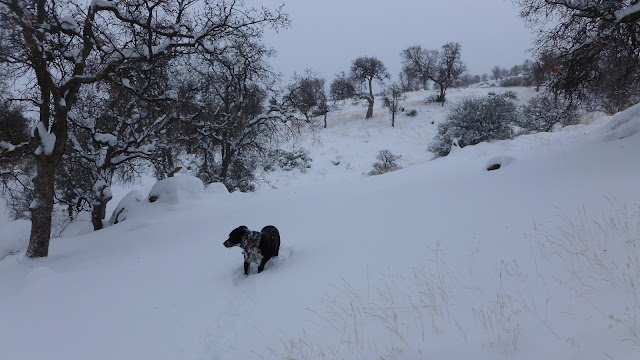 Ice bear recovery after a hard play in the snow: 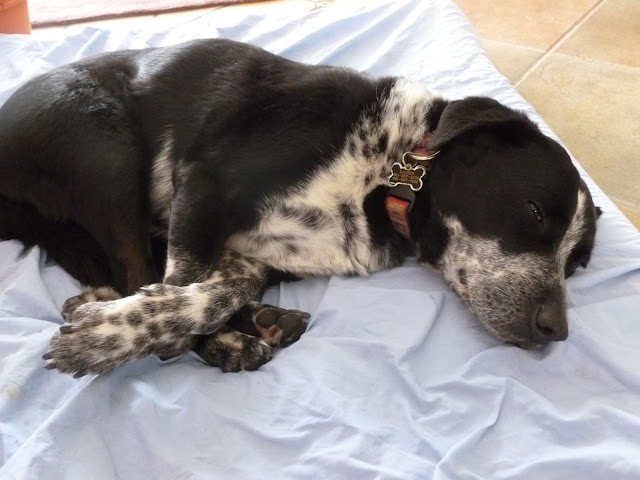 Be well, adventure hard, and get out there--regardless of the weather...
Posted by Scott Wayland at 12:18 PM 2 comments: 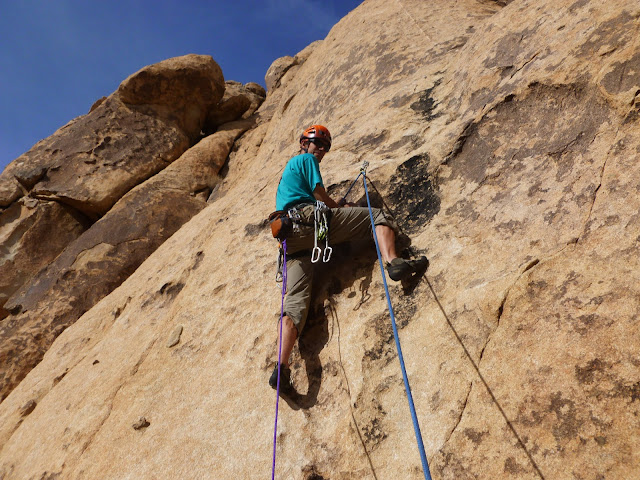 It has been some time since my last post, so I thought I'd throw down a few photos, random thoughts and musings.  Since completing the big tour, I've had very little interest in getting out on the bikes or trike.  Perhaps that's natural after three months of pedaling six hours a day.  Now that I'm back in the classroom warping (mostly) young minds, I ride my trusty commuter every workday to the bus, and I always enjoy that exercise, that brief connection with nature and the pedals under my feet.  But after ten years of chasing the velo-dream, doing tour after tour after tour, riding coast to coast and border to border, I wonder if I've reached some sort of saturation or perhaps satiation with that particular kind of movement.  I posted recently on the Adventure Cycling forum about "traffic burnout," and for me and Jodi, this is a real syndrome.  Let's face it:  Road cycling would be a hell of a lot more pleasant without cars, which is never going to happen.  I envy folks with really nice bike trail systems that allow for more than a few minutes of car-free pedaling.  I'm definitely still a cyclist, but they'll be less cycling in my future, at least while my old climbing addiction is up and raging.

This was my first and, perhaps, still my greatest love.  I've had periods where it receded from center stage--see most of the last ten years--but it was always there, surfacing, pulling me back under and up and over.  For about 36 years now I've felt the pull of the stone.  When I've been away for a while, the re-entry can be a little rough, the fear factor high, but I have to remind myself that with persistence and patience I'll find that old center, that old joy at pushing through my own fears of failure, the uncertainty of the way ahead, and pulling at last up to the ledge or anchors or summits.  Each climb is an intense burning dream--even the easy ones--that surround me in a perfect zone of concentration and focus.  With that first step up and into the struggle with gravity and the puzzle of the rock, there is nothing else.  It's a deep and wonderful dance, and I feel privileged to be able to still climb after all these years.  I'm finding, too, that I'm about up to the level I've climbed in the past, getting up moderate 5.10's without falling, on-sight ascents.  Jodi and I have put a little weight training setup in our garage, and we get out to the rocks almost every weekend.  These are special times together and connect us to our past as well.  I met Jodi when she came into a mountain shop where I was working during my student years.  She needed a set of crampons for a mountain she was going to ascend.  Now, over twenty five years later, we're still together.

Part of my Renaissance of climbing has been introducing the next generation to the sport.  During  a Vision Quest outing a couple of years ago, I was driving a support vehicle because of a knee issue.  That gave me the ability to bring along climbing gear and give the lads a chance to play on rocks that were close to the cycling route.  Now, one of the riders, Trent, has become a great friend and a good climber.  Soon he will be climbing circles around the "master," and I'm totally excited about that!  He's such a great athlete and an even better human being.  It's been a huge gift to become his friend and take him out to the rocks.  Here are a few photos of a recent trip to Joshua Tree National Park, the scene of many exploits in my past reaching all the way back to when I was Trent's age: 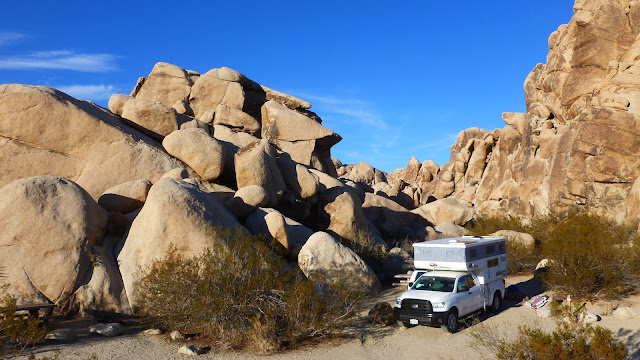 The realm of infinite stone: 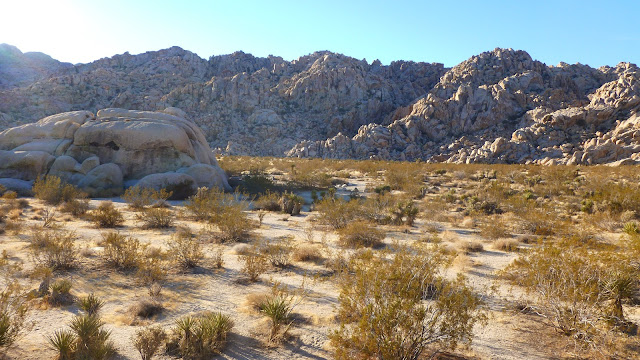 The Lad getting ready for his first gear lead: 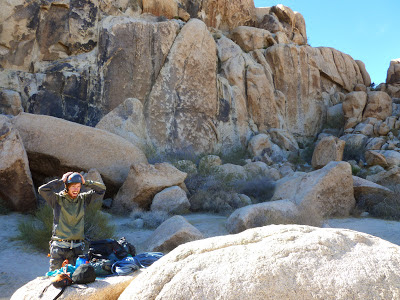 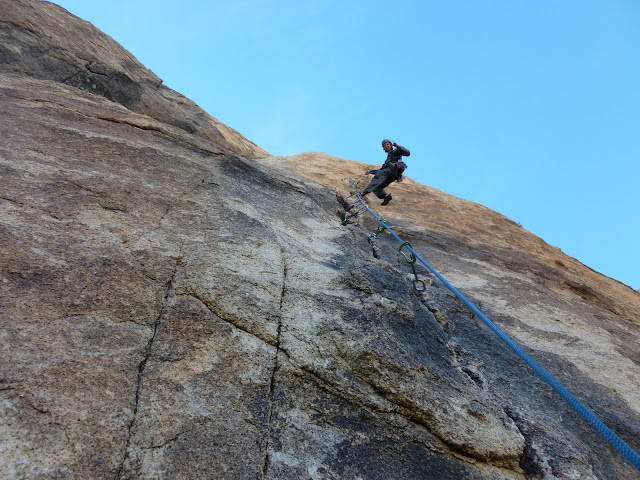 On the way out to Outer Siberia--Joshua Tree style: 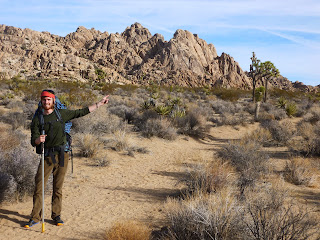 Getting up to the base: 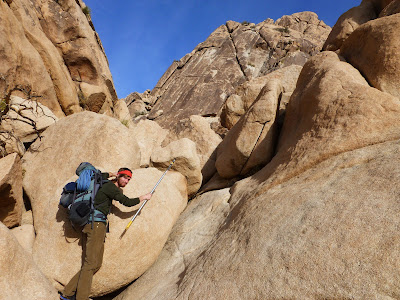 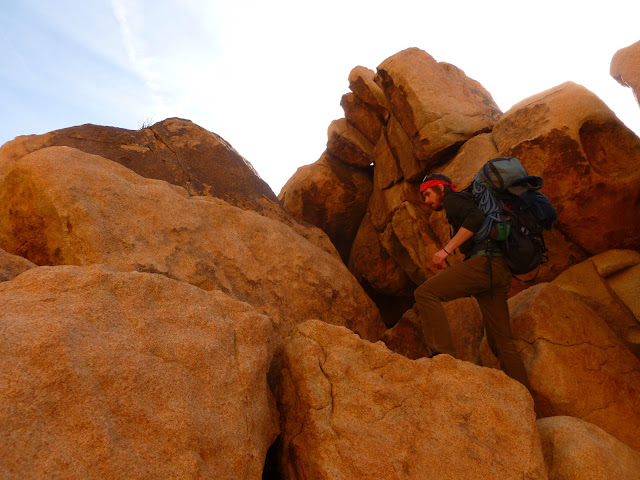 The best way to be high: 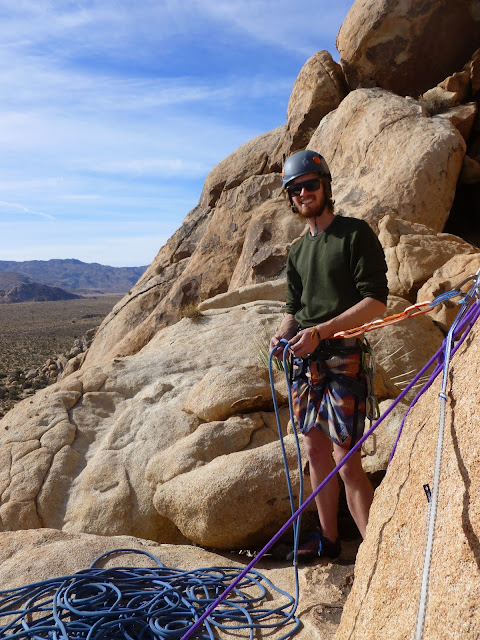 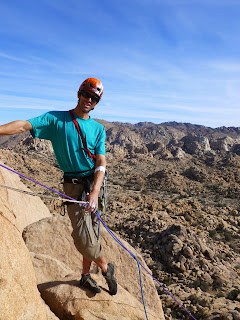 A climber on a route nearby: 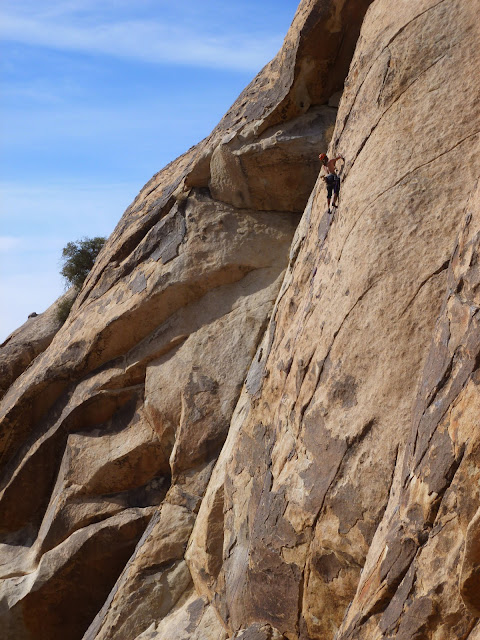 Sunset in paradise (you can keep yer cheese burger Jimmy B.): 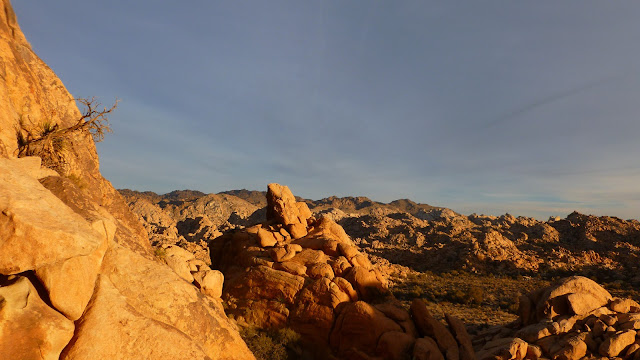 We hiked and climbed and laughed and dangled from our fingertips above the void.  No traffic, no exhaust, no inconsiderate drivers buzzing by the ledges.  Just good company, the rocks all around, and a bright winter sky above.  Untold riches cannot buy better moments in life.  I've had some of these kinds of moments cycling, too, of course, but they're easier to come by in the wilderness.
Posted by Scott Wayland at 5:36 PM No comments: