The Hammer of Doom We've had an extraordinary string of days this June, windy, but so cool and beautiful up here in the mountains.  Days in the low to mid 70's, nights in the 50's.  Of course, true summer was always there, God's own blowtorch poised, the magnifying glass about to focus the beam on us miserable little humans.  I've been watching the coming heatwave predicted to kick in tomorrow and stay for a solid week.  Up here at over 4,000 ft. we'll be in the mid-90's, maybe one day of 100.  I can tolerate the heat, but I don't like it.  We'll have to drag our butts out for very early AM exercise.  Fortunately, we've got a damn cat that wakes us up pretty reliably shortly after 5AM, so might as well get out and put in some miles.  The photo above is from yesterday's ride, perhaps the last day we'll see in the 70's until late September.  It was a windy but glorious ride, the air of such sharp clarity that trees and mountain ridges miles way seemed laser cut.  Oh well, the heat will keep me inside and focused on the new book.

I've been thinking a lot lately about the freedom we have to ride and hike, to move about.  It truly is a gift, especially so as I struggled through the tedium of the jury selection process recently.  Three and a half of these wonder days were lost to do my civic duty.  Day after day I sat in the audience chairs, listening to the same questions about jobs, history with the law and crime, looking at the young man accused of attempted murder.  He sat grim-faced and silent.  Did he do it?  I'll try to follow up on the case, but after escaping the jury, I discovered that bail had been set at $2,000,000 and that he'd been arrested two years ago.  I doubted he or his family had the resources to cover that.  Already two years of his life behind bars?  No rides in the sun for this fellow.  Fortunately, the passions of my youth were about testing myself in the mountains, about crossing deserts and glaciers, earning degrees and not flinging hot lead at other men in the sad back alleys of Bakersfield.  No, I'll take my quiet, strange little life of twisted bicycles, sweaty climbs, and hikes in the early morning light with Django by my side and leave the gun play to others.
Posted by Scott Wayland at 6:39 AM No comments:

While I'm not averse to adult happy beverages, my love of them has not put me on the bench--yet.  No, dear readers, you few brave souls, its another athletic injury.  Rarely in my life have I hurt myself in the usual, dramatic ways--broken bones, gashes, amputations  No, it is my lot in life to stress and strain my connective bits such that, while I'm by no means incapacitated, I'm compelled to stop doing whatever it was that caused the injury, stuff that I really love to do.  This, of course, means biking, climbing, whatever.  Last year, I was able to smash the middle finger of my left hand with a rolling block of granite.  This year, as if I've got some diabolical problem with that digit, I managed to pull some connective tissue--swelling, minor pain, major pain in the ass.   My big plans for rock climbing this summer are over.  Yeah, I know, First World Problems, but they're mine, so I get to indulge.  What's the old line?  You want to hear God laugh?  Tell him your plans.

I have not been blessed with the most resilient of tendons.  I suffered my first such injury in my early twenties, and, as is typical, it took many, many months to fully recover.  Even today, thirty years later, that elbow can talk to me.  I think I've gotten better over the years in dealing with these setbacks, but they still drag me down.  I have to breath deep, be thankful for the true bounty of what my life gives me, and shift my focus to other things.  I'll hike, ride the great recumbents in my mini-barn, work on my book about the Great Divide tricycle madness, and live for a while without climbing.  This is not Greek tragedy--more like geek tragedy.  Still, it's no fun to have your wings clipped.
Posted by Scott Wayland at 8:53 AM 2 comments: 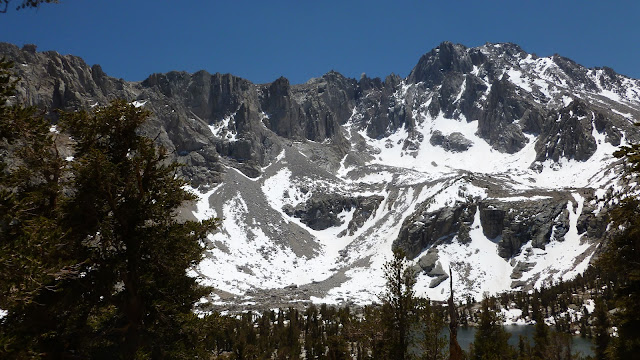 I've been AWOL for a few weeks, so it's time I caught up on a few things.  The Vision Quest 2013 is complete and, for a number of reasons, was not what we had planned.  Still, some visions were had, I look forward to more.   The first change was abandoning the ascent of Olancha Peak.  Since the number of participants had dwindled to just four total, there was no point in taking two vehicles, so the shuttle between points on the trip would not work.  More worrisome was the possible lack of water.  After ascending Cirque Peak earlier in the month, we could see that Olancha Peak was dry, dry, dry.  Since this is the second dry year in a row, I couldn't be sure the spring on the descent would be available, and for sure there would be no snow.  What to do?  We shifted to a hike in the Kearsarge Pass region further north that had streams and lakes and, because of higher altitude, snow, as you can see above.  While not a brutal outing as I'd expected on Olancha, it was extraordinarily beautiful, sufficiently hydrated, and still challenging.  From a camp near a lake, we ascended to Kearsarge Pass and topped Gould Peak from there, over 13,000 ft. above sea level.  The main challenges we faced were thin air and very stout winds, so much so that we only camped one night because no one was getting any sleep--oh, and I forgot to pack Jodi's sleeping bag!  I carried a queen-sized comforter from the camper instead, but it was not fully up to the job with the cold weather.  The upside was that we saw few other hikers, and the mosquitoes were yet to make their appearance.  It was good to be in the high country again.

The next complication was Kevin's illness.  He'd contracted some bug at the end of the semester, and while he was able to hike in and get up the peak, it wasn't easy, and the infection was still growing.  By the time we got to the rock climbing portion of the trip, Kevin was an unhappy camper.  He rallied periodically so that we could chat around the table in the camper and such, but the very cold--low 20's F.--nights at the rock climbing area were not good for him, so the trip was cut short by a few days and we worked our way home.  So, all in all, an okay but not great outing.  Below you'll see some photos that show the best of what it had to offer, which was still pretty good.

Django carries his own gear: 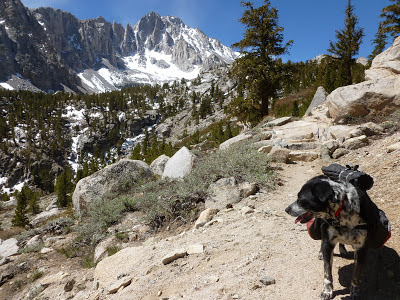 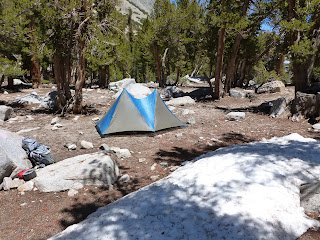 Let's get to the heart of the matter; 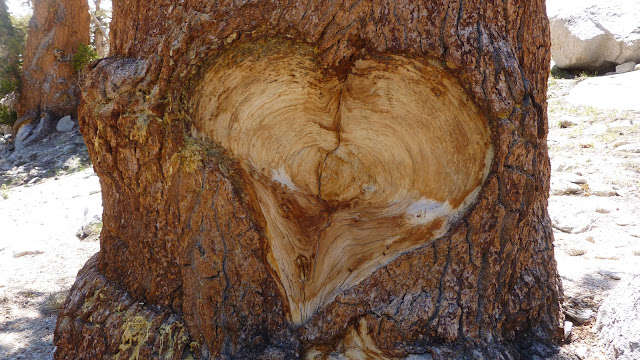 Max, Kevin, and He Who Eats Kibbles on the trail: 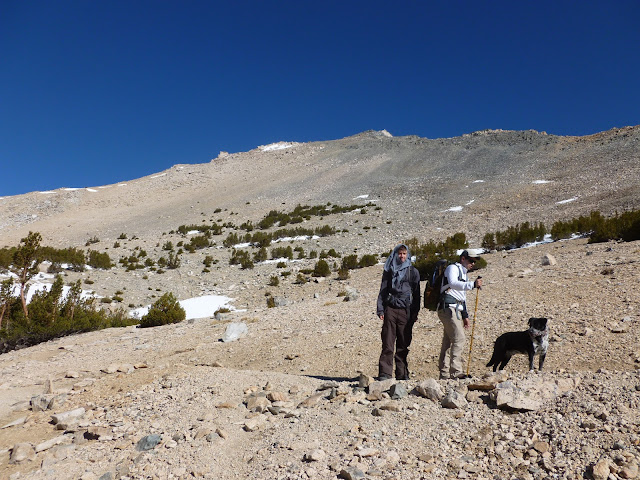 Ice on the water: 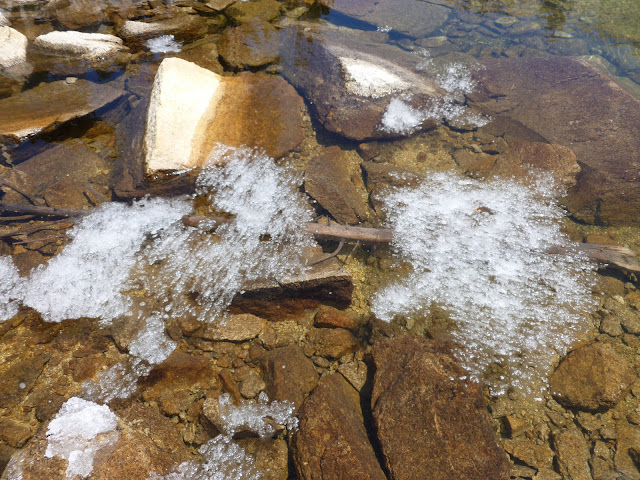 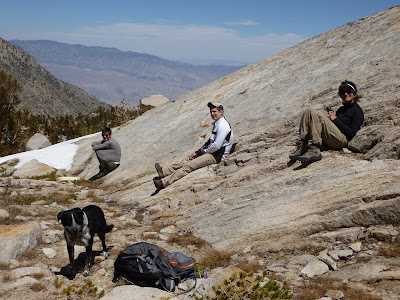 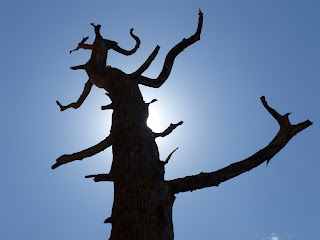 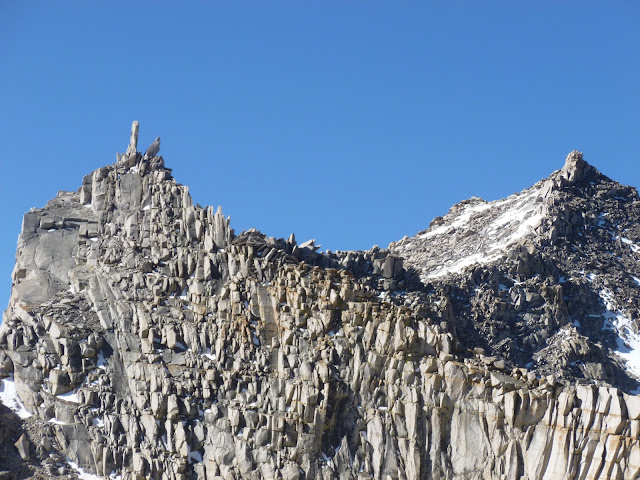 Taking a break on the way to the top: 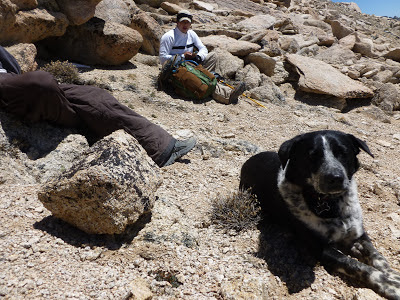 I took no photos from the top due to extreme winds and Django stuck below the summit blocks giving me an anxious look.  We hiked back to camp, packed up, and headed out.

We did, as I said, some rock climbing.  The route below is the most dramatic: 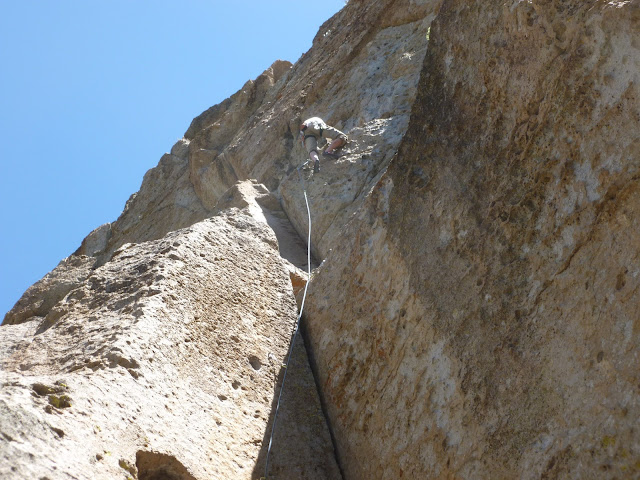 Max catching some zzzzz's atop a warm bear box: 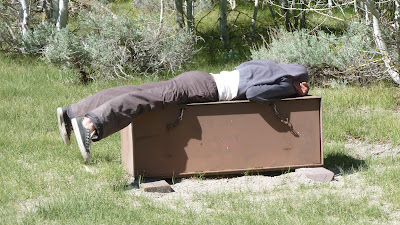 So there it is.  Done.  Over.  What are you gonna do?  I think I'll go back to a bike tour for next year's adventure, probably a repeat of the N.E. California/Oregon loop we did in 2012.  Now that I've worked out the kinks, we can make the trip even better.  Max, recently graduated high school, has signed on, and Kevin is always up for adventure.  We'll see who shows up at the starting line.

Posted by Scott Wayland at 8:26 AM No comments: