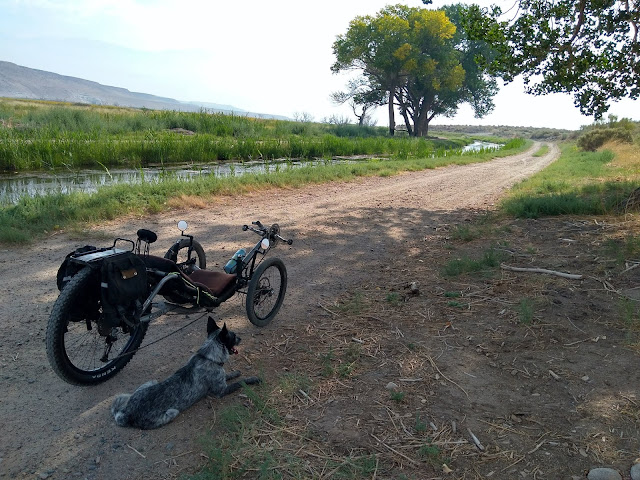 Took the retooled Phatty Trike out for a quick run on a dirt track along one of our several canals.  Patchy ran off leash like the lunatic he is.  I got to feel out the trike changes.  Flat, pretty smooth riding meant no challenges to speak of, but I noticed that when the going got rough, the chain would catch a little on the tire knobbies when in the lowest cassette gear--not bad, but noticeable.  I'll have to add a couple of washers, which will likely necessitate an even longer bolt through the idler.  Fortunately, I saw 1/2 in. longer bolts in the same style at the hardware store, so it's all doable.

The ride was a little rough with no weight on the rear wheel, and I'm running somewhat higher PSI in front.  Gotta get out with a full load and trailer again--not to mention climbing--to really put the beast through its paces. 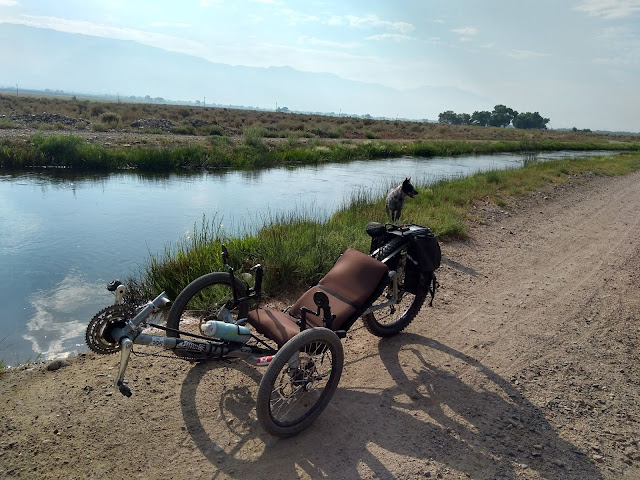 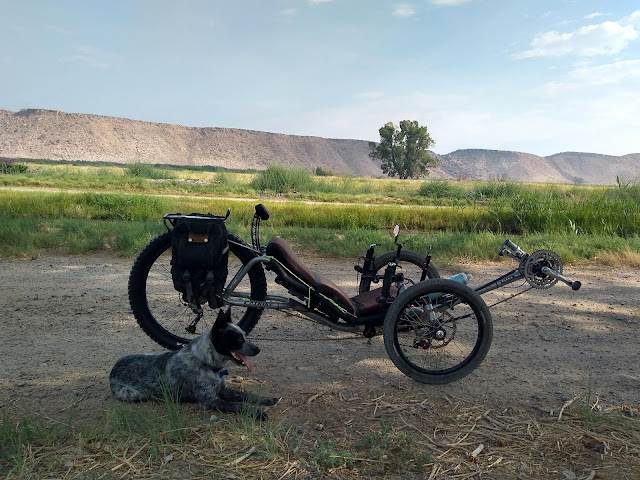 Mega Trike Mods -- Give Me Dirt

The main hardware finally arrived for the mega trike makeover extravaganza.  I've had the frame extensions for a while, but the new wheels, cassettes (11/36) only arrived recently.  Also, I've been dealing with some issues regarding tubes on my Expedition.  It turns out I've been running too-low pressure, and the tire/tubes have been slipping, pinching the valve stem.  I couldn't let out pressure, even after removing the valve!  Slime and severe pinch kept the air in the tube.  Eventually I wiggled it out and replaced it.  I'll have to watch the pressure in the future, and I'll probably be going with schreader tubes with steel threaded stems, which are superior on several levels. 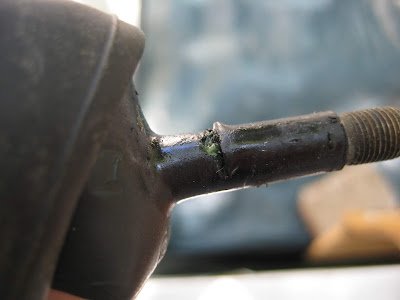 But these were the main event--New "Cliffhanger" 36 spoke wheels from Velocity care of Dana at Bent Up Cycles. 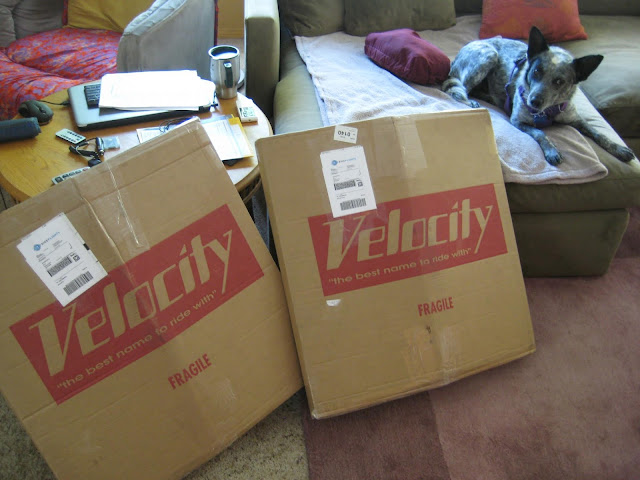 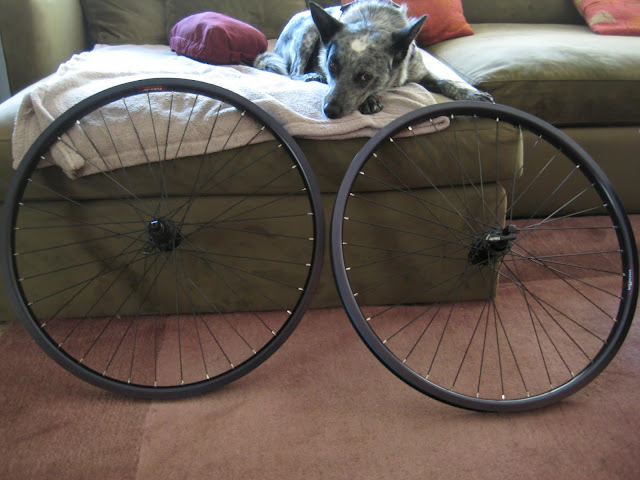 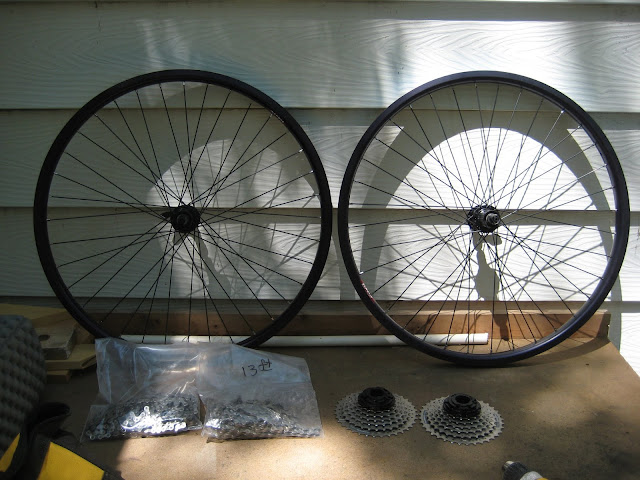 Here is my rear wheel with a fat 2.7" wide Kenda ready to go. 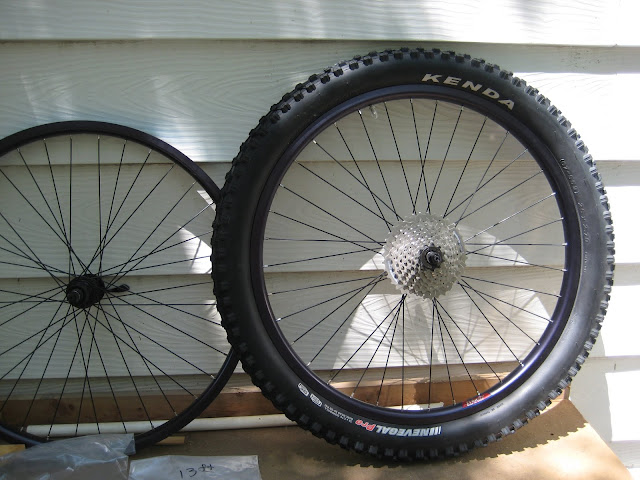 Next, it was off to disassemble and remake the Expedition and Road.  I spent a few hours on each trike to make the transition--removing parts, adding parts, measuring and fitting new chains, etc.  I find great enjoyment and satisfaction in such work, especially when the results are so dramatic.  The conversion was pretty straight forward.  Because the new tire was so PHAT, I had to bump out the idler under the seat so that the chain would not rub on the knobs when in lowest gear.  This necessitated a new, longer bolt and a little stack of washers.  It now clears nicely and shifts like a dream. 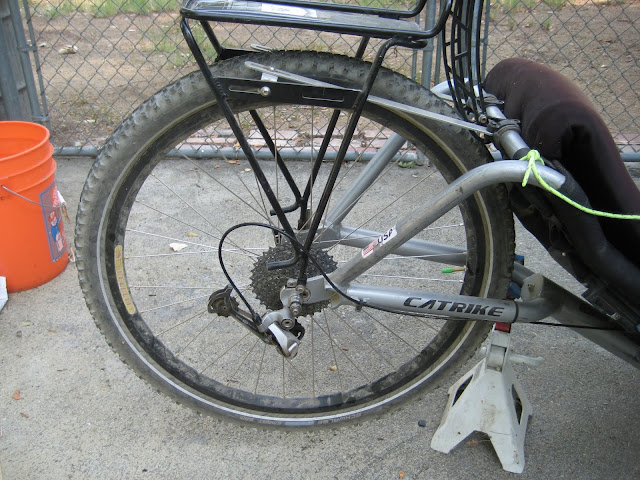 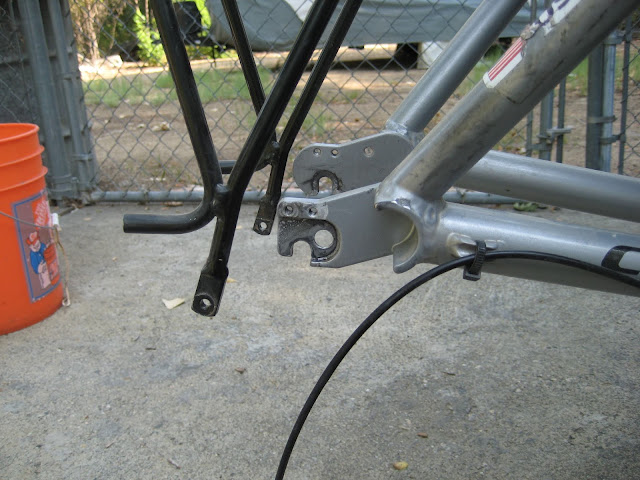 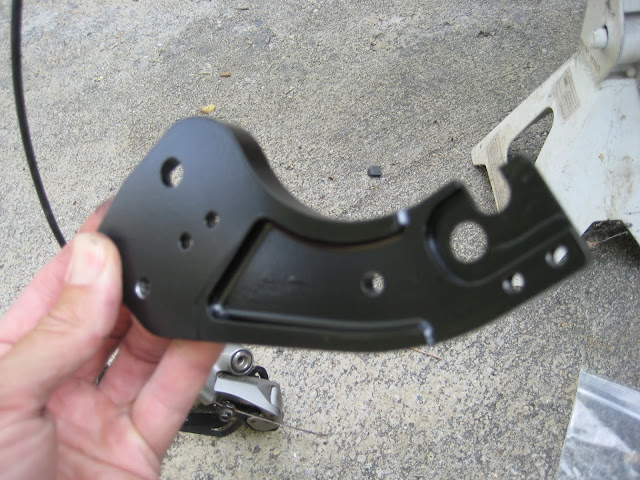 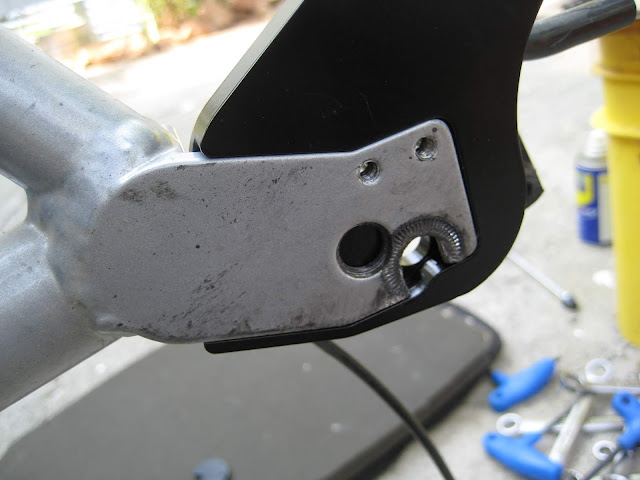 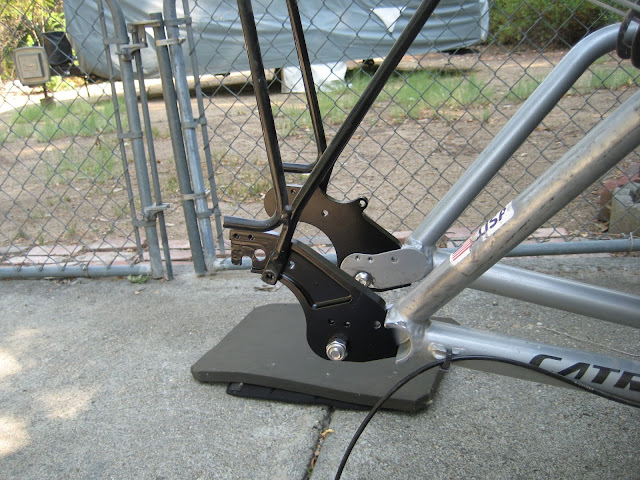 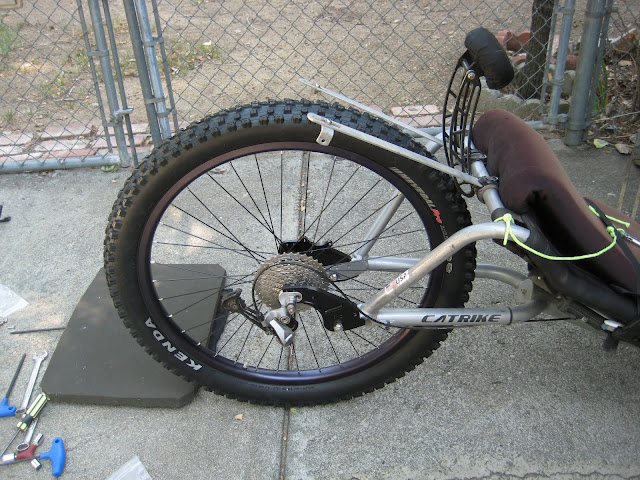 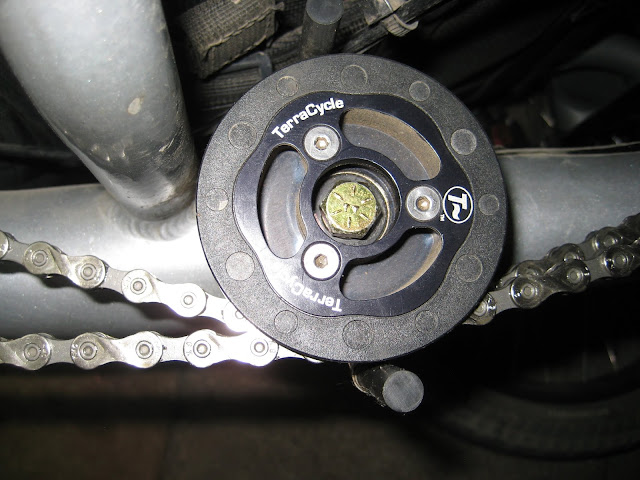 Washer stack to realign chain run.  With so much chain, it's pretty easy to move and not affect shifting in any way: 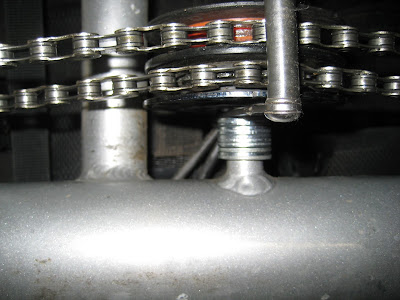 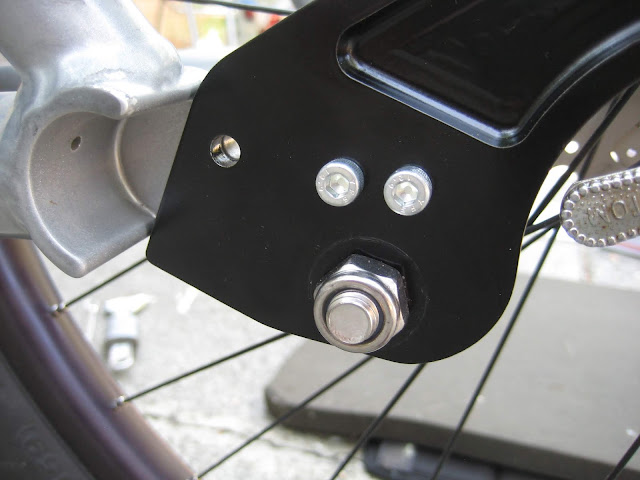 The original rack fits, too, although we may get new, beefier models for the actual tour.  Our current racks are aluminum, and cro-moly might be recommended for the remote, tough riding we'll be facing.  New racks will run about $140 each, however.  Ugh. 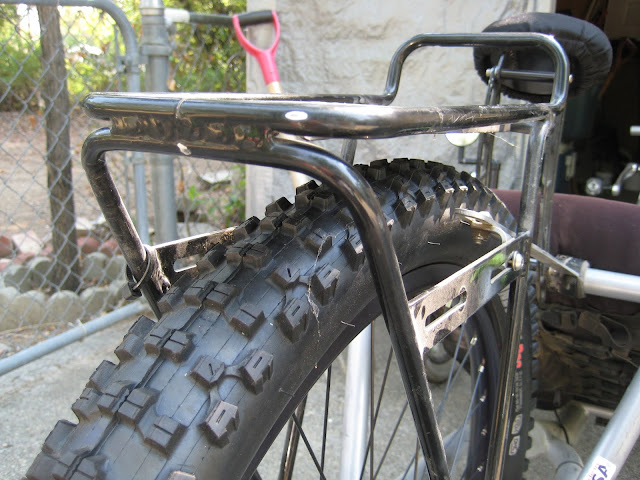 The Road got the same treatment, although with narrower tire.  I think we can go 2.1" or 2.3".  The tire installed was on my Expedition and measures 1.95".  One wrinkle in the Road conversion was the different frame design.  To accept the larger wheel and avoid the chain rubbing on the stay, a floating idler had to be installed.  This was a total "plug-and-play" kit that you can purchase from Utah Trikes at the time you get the frame extension.  Remember, this is ONLY needed if you are converting a Catrike Road.  The Expedition works without it.  What a slick kit! 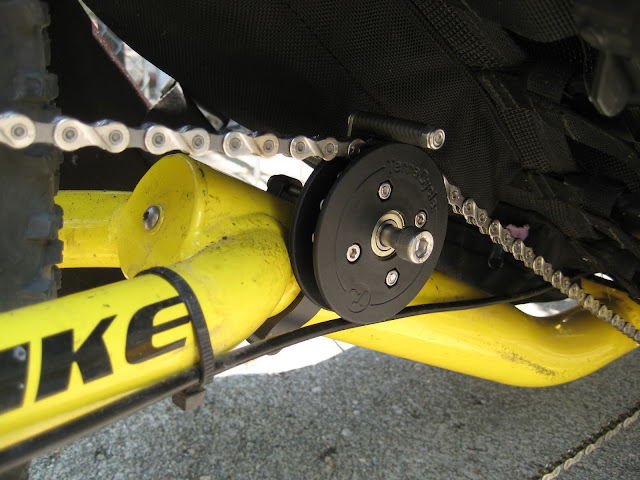 Here are the rigs--phat and ready to ride: 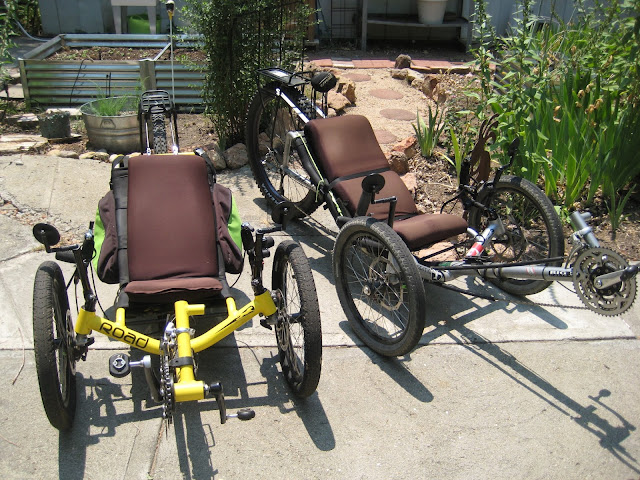 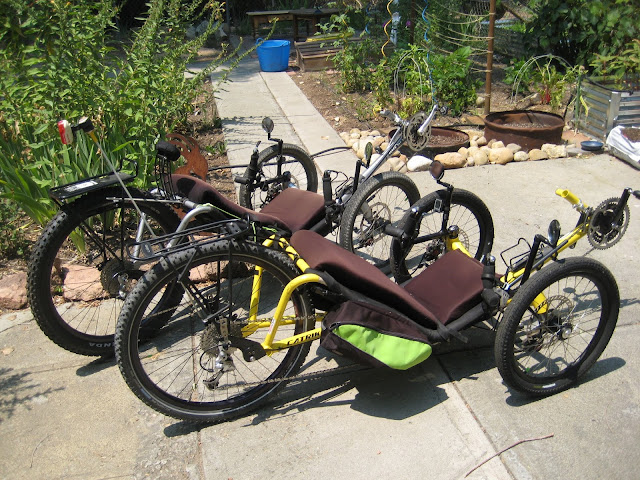 Current conditions are not great where we live--really hot, like 100 deg. F. every day--and very smoky from fires, well, everywhere--so I haven't taken the Expedition out for much but up and down the street to check shifting.  I'll have to do an uber-dawn patrol to test drive the new configuration, but bumping through some potholes gave me great anticipation for the future.  Jodi is quite happy with her conversion, too.  One step closer to the Great Divide.

Oh, and the maps came, too!  It turns out Adventure Cycling has mapped the Divide starting in Jasper, Alberta, the starting point for our own, mostly paved Rockies tour in 2012.  I don't think we'll ride this, but I am leaning towards starting in Banff.  Canada is just so bitchin', albeit expensive. 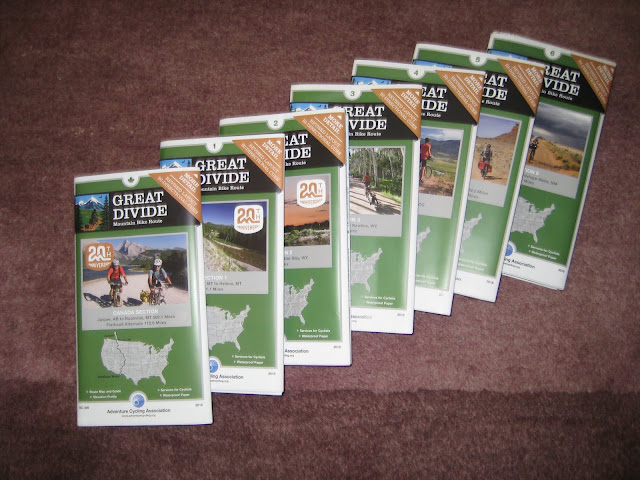 Posted by Scott Wayland at 2:41 PM No comments: 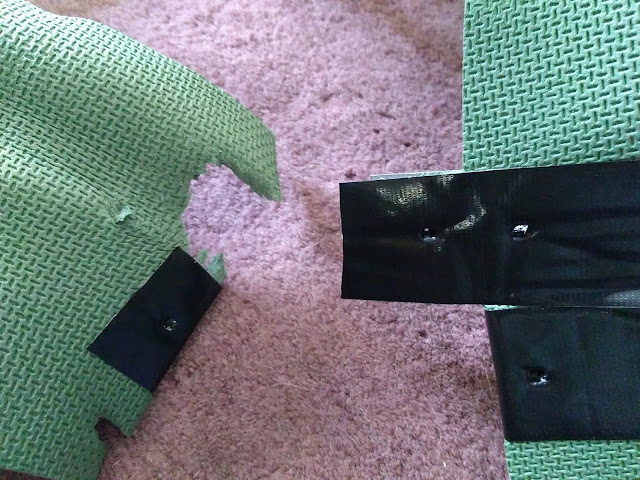 What you see above are some tests I ran to see how I might connect some closed cell foam sections to serve as a liner for the BOB trailer.  Patchy will need some protection from the steel mesh of the base, not to mention debris, dirt and dust from the road.  I researched having a custom liner built, but the $400 tag was too rich for this hound--and Patchy can't earn any scratch on his own.  So I suspected some Gorilla Tape might be useful.  With only the adhesive to hold the two pieces, I pulled until failure.  Impressive grip.  But I needed to engineer a right angle connection where the sides would meet the base. Enter a man's two favorite things:  Duct tape AND zip ties.  Ah, the possibilities.  With a layer of Gorilla Tape, a punch, and some ties, I figured I could make a pretty tough connection.  I was right.  Below are some pics of the process.  Jodi had the idea of clips to hold the sides on, although I might go with zip ties there, too.  We'll see how it holds up during the training runs. 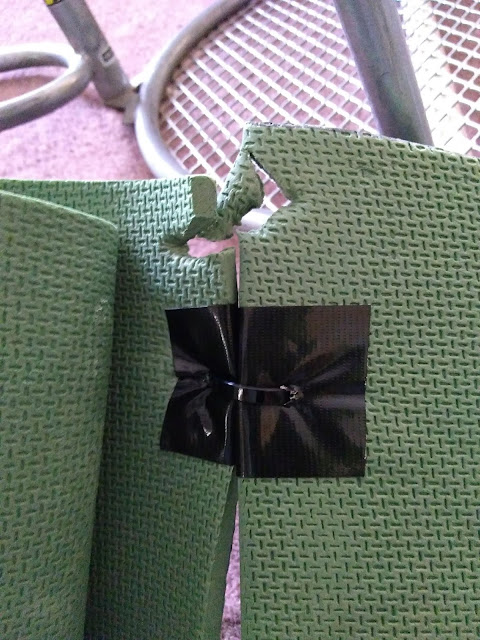 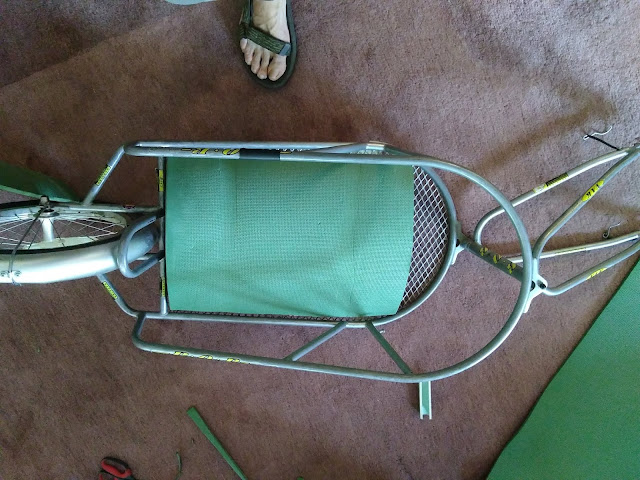 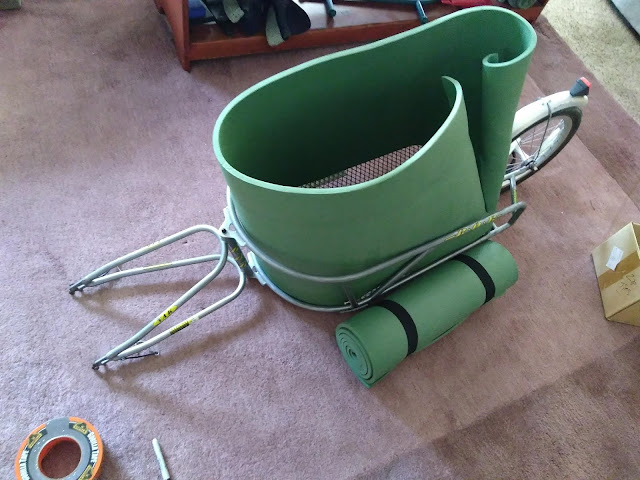 The finished product.  Two zippered pockets will be attached on either side of the wheel to fully enclose "the chariot."  I'll need to configure some tie-downs for Patchy.  We're fairly certain he's too ADHD to simply sit on his own as we go flying down the road. 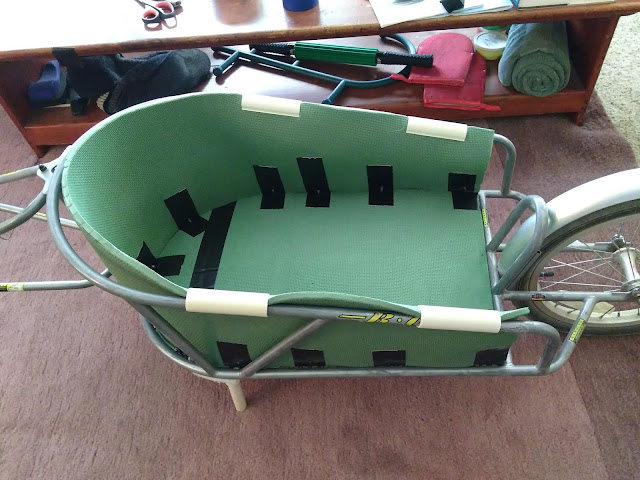 In other news, I've received the frame extensions from Utah Trikes and ordered a new wheel for Jodi's Catrike Road.  On considering the width of the tire I've purchased for my Expedition (2.7 in.), I realized that my existing rim would not do the trick.  So I added an extra wheel to that order from the awesome recumbent shop Bent Up Cycles.  Dana, the owner, has been my main drug--er--bike dealer since I first got into recumbents.  He also builds top-notch, high performance carbon fiber recumbents, too.  Thanks, Dana!  I'm gonna need cassettes and, almost certainly, new racks for both trikes.  Prep for this trek is not coming cheap.  Thank goodness Jodi is working.  These will be some killer off-road Catrikes when we're done.

Posted by Scott Wayland at 8:18 PM No comments:

Took the hound and the Expedition back up to the training area, determined this time to gain some more altitude.  I was encouraged.  We hit the road early and were riding by about 6:30AM, 30+ pounds in the panniers, a couple of tents lashed to the BOB.  I climbed steadily and pulled through one extended patch of soft sand, but only for a hundred yards or so, then it was back in the saddle and cranking.  This is a generally rough track and so provides a steady challenge.  I knew from my previous outing that the climbing was steep, but that gentle graph above doesn't do the riding justice.  Except for a few early patches, most of the riding is 9% or better, the last mile about 10% or better.  Ugh!  Ugh!  However, with the ultra-low gearing of the Schlumpf Mtn. Drive, I was able to keep cranking and make steady progress.  I made it to the turn-around point in an hour and fifteen minutes with what amounted to a touring load--or at least pretty close to it.  I could see having another ten pounds or so, especially when hauling extra water.  If I can gain over 1,000 ft. in just over an hour, the Continental Divide is in trouble, that's all I'm saying.

Only about 400 ft. or so of gain beyond my turnaround point is a very nice camping spot next to a creek, and the road along that stretch is good, unlike the initial climb.  On the menu then is an overnight, although I may wait until it cools off so I can start later in the day.  I could make it pretty easily now, but that would mean arriving in camp at about 8AM, so an afternoon start, camp, and morning run back down makes more sense.  Lovely country up there.

Patchy, of course, was a maniac, covering more than twice my distance and twice my speed.  What a hound.
Posted by Scott Wayland at 5:08 PM No comments: