The hawk and the dog food 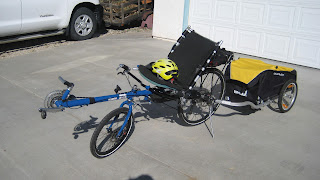 Today I squeezed in a utility ride on the trusty Haluzak.   We've been having some bright, brassy late fall days, and I wanted to get out before the impending storm shut down cycling for a couple of days.  We're due for some possible snow say the weather gods.  I hooked up the Burley trailer because the load was going to be bulky and substantial, about a 30 lb. bag of dog food plus a bunch of cat food in cans and a few things from the Home Despot (my snarky term for Home Depot, the housing supply super giant warehouse store).  One of my goals was to see if I could dampen the squeak that develops on the Burley hitch, but I failed.  I put some wax on the somewhat flexible attachment point, and it was quiet at first, but once loaded, the noise was back.  Arrrgh.  I hate repetitive squeaking sounds coming from my bikes!  The noise might be from a different bearing point, so I will continue my quest.  The old style hitches never had this problem.  Burley is of no help.  They were surprised  that I had  any problem at all with this.  I own three of these trailers as I loan them out to other cyclists when I run a now annual bike touring club.  ALL the trailers have developed the squeak, squeak, squeak....

Still the ride was fantastic, but I noticed the shift in the wind direction, and I had to layer up for the ride back home.  My total load was a bit over 40 lbs.--not including the trailer, of course.  If I can fix the noise problem, I might tour again with a trailer.  The convenience of packing and unpacking is amazing. 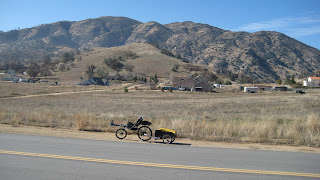 On the way to the various stores I was heading for, I saw a small squadron of hawks blaze low and fast across the road.  At first I saw two, big red tails, but then, as I rolled by a tree, I spotted the hawk featured below and was able to get pretty close for some photos.  We're seeing a lot of raptors come through our area, which is a major migration corridor for all kinds of birds.  Jodi was on a hike today and saw an eagle! 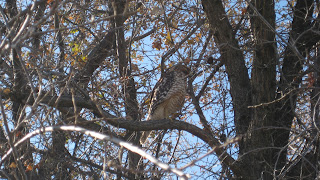 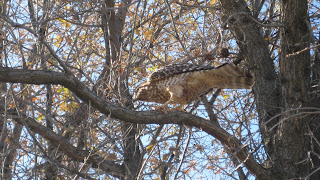 I think this was a Cooper's hawk.  Not sure on that, however.  Later, I made it to the pet supply store and loaded up for the slower slog home. 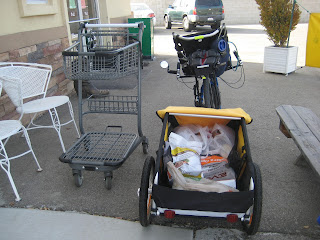 It was good to do it all without starting a car.  I was the only one out and about on a bike that I could see, which is pretty common around here in a our car-crazy culture.  Certainly, I'm one of only, literally, three or four people who seem to shop and do practical things on a bike.  With all the hugely overweight people in this society, I wish I could get them to see the fun and practical benefits of even simple daily chores done on a bike.  My next posts are likely to be hiking pics.  Let's see what this storm has to show for itself.  Django LOVES the snow!

Posted by Scott Wayland at 4:21 PM