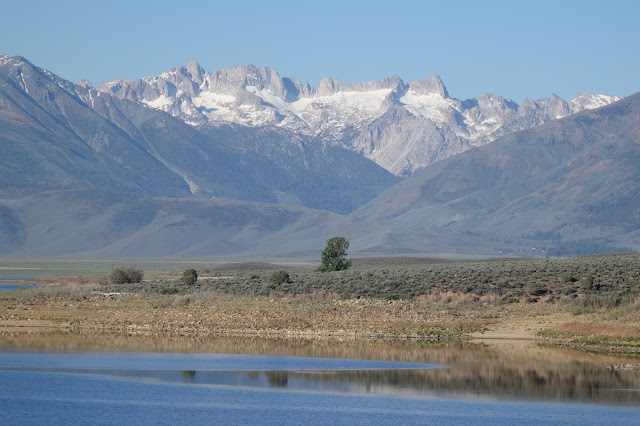 We slept well beside the river, the breeze blowing steadily through the pines.  Up with the birds and the first paling in the east, I sit up in the tent and get the day rolling, packing the down bag in its tiny compression sack, putting on riding clothes.  I stumble out and spark the stove for my solo drug habit.  I know it's not good to drink alone, but when it comes to coffee (the true spelling of God), I'll drink solo if that's what it takes.  I've got to find a way to get Danny hooked.  By 7AM, we're turning pedals up canyon, following the river to its source, a large but shrinking reservoir going to the dogs in this drought.  This one is saved by grasses growing down to the shore, so the "bathtub effect" isn't so bad.  The crown jewel of the area glows pale in the morning sun, the Matterhorn Peak range bordering northern Yosemite, the scene of my first alpine climb back when I was 16.

We zip along the water's edge, happy to find the road has been repaved to mostly fill in the previously brutal frost cracks, which resulted in miles of chunk-chunk! chunk-chunk!  chunk-chunk! as front and rear wheels hit the mini Grand Canyons.  Now we gently glide over the gaps, the dips mild and quickly forgotten.  By 8AM, we turn onto Hwy 395 and begin the business of Conway Summit for the second time on the tour.

Hot, slow climbing leaves us gasping and suddenly pouring sweat after the earlier cool riding, but there's nothing to do but keep at it.  The massive peaks of the Sierras close in to keep us company and ease the strain.  After a couple of miles, the wind shifts, and suddenly the climbing is all roses and puppies.  By 10:30AM, we're grinning fools on the summit.  The descent is too quickly over, like life, in the end, I've been told, but these moments of speed and freedom, the blue eye of Mono lake calm and inviting, the White Mtns. still white and lordly in the distance, the high country around Mammoth to the south pulling us on and on and on...these moments are worth living.  We live them well and roar into the basin, cross the lake shore, and climb painfully back up to Lee Vining, the day's riding done and done.

The tour is nearly done.  I'd thought of climbing Tioga Pass, but the heroics of yesterday have slaked my thirst for big days.  Today we'll lazy about, shower, rinse out riding gear, slurp coffee at Latte Da.  A world class re-match is in order at the Whoa Nellie Deli, gourmet food at a gas station if you can believe it.  A pitcher of Golden Trout Pilsner is in serious trouble, too, if we have anything to say about it--and we do.  Tomorrow we'll roll back the miles to Tom's Place for a fairly short day because the thought of descending into the furnace of a Bishop afternoon is not appealing.  As it is, the day will be warm enough.  My next post will be from home to wrap up the adventure and discuss the gear I've selected for this adventure. 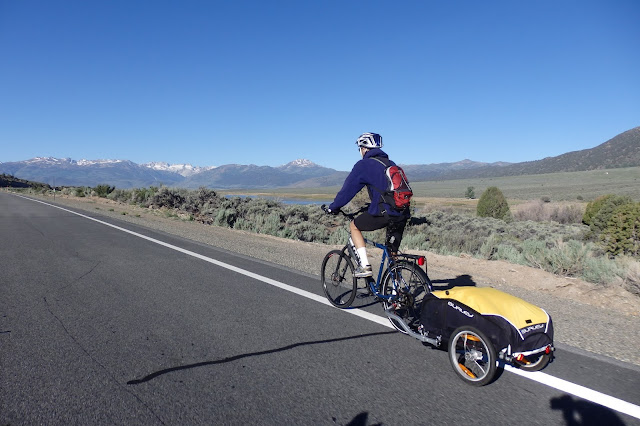 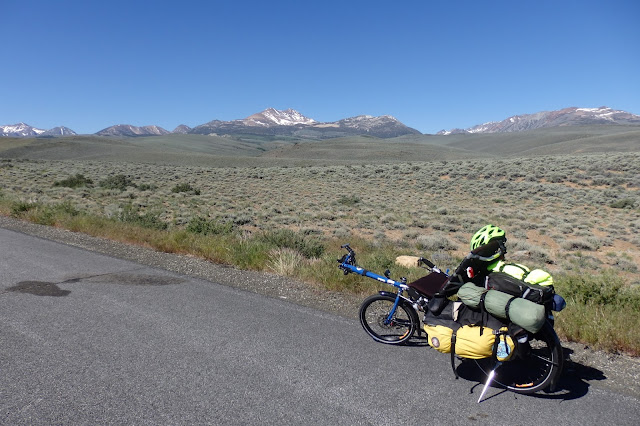 Posted by Scott Wayland at 3:21 PM