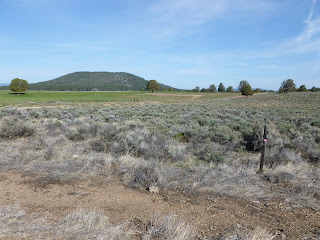 This was the big one--long, big, hard and satisfying.  That sounds kinky, but really it was just a great day to be on the bike.

We awake to freezing temperatures, numb toes all around.  We start early because the night before we decided to push for Lakeview--all the way, a 70 mile plus endeavor with a couple of passes.  The boys were game, and a good shower was waiting, so this morning we are off and running.  The ride is exhilarating through deep shaded forest, pine covered peaks and ridges, the highest still holding snow, the valley bottoms thick with grass framed in sage, horses running to keep pace, slow-faced cows staring, a blue, cloud-streaked sky overarching.

My initial concerns about Hwy 140 were unfounded.  Although most of it has little shoulder, the traffic is very light and the drivers courteous.  We work hard, however, and Richard and Kevin, for some reason, had virtually nothing for breakfast and can feel the bonk sinking in, so we stop at a classic cow town cafe for a fat eggy  brunch.  No champagne cocktails, but the food is good and filling.  We eat up the calories and give each other meaningful glances when a virtual hobbit or, perhaps, garden gnome comes in.  Maybe five feet tall or less, black knit cap and long black coat and pants, dramatic white beard and hair that, well, looked like you'd see on a garden gnome.  There's no other way to put it.  Seriously, I checked the databases, called the appropriate government agencies, took an instant Gallup poll.  All confirmed my initial assessment: garden gnome.  He ambled in out of the blinding light and asked for a coke.  None on hand.  Okay, coffee then.  Later, after being joined by Ms. Garden Gnome, he hears someone has a Pepsi.  "Hey," he says, "I wanted a coke.  Can I get a Pepsi?"  The young waitress complies.  Coffee and Pepsi?  A man hell bent for caffeine. My kind of hobbit! 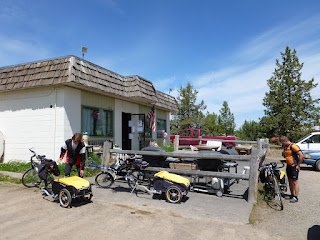 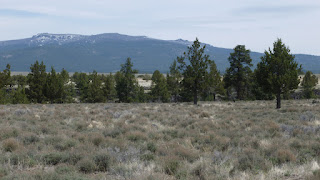 After, for me, breakfast number two, we dig into one of the biggest climbs of the tour--Quartz Mtn. Pass. It's long, steady, sweaty work but not too steep.  My original plan had been to camp somewhere in the vicinity of the pass, so I keep my eyes open for possibilities.  A mile or two short of the summit, I spot a dirt road dropping down to a creek, which should always be flowing in the spring.  Rollodex that baby for future reference.  I guess there are a couple of generations who won't get that reference.  Oh well, a codger's got to write what a codger's got to write, eh?  We rest on the summit and then get on with it.  Lots of miles to log still. 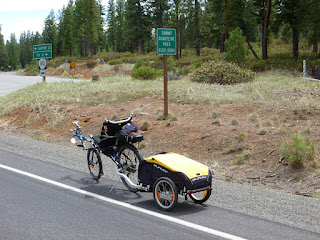 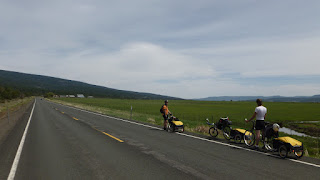 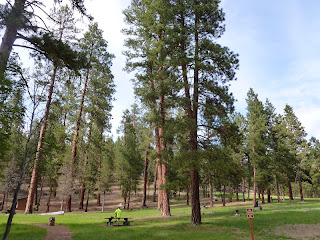 Late in the day, strung out and looking for the end, we blast into Lakeview, the sun and wind at our backs, flying on two wheels.  In one giddy, weird moment as I race by a staring horse, I have the inexplicable need to flip him off--F-you, horse!  Craziness brought on by too many fully loaded miles.  Kevin pulls up alongside.  "Did you flip off that horse?  That's badass!"  We laugh and roll and reel in Lakeview and the Warner Mtns. on the horizon.  In town, we poke around a little and find we can camp at the fair grounds--$2/per person, showers, no midnight irrigation--perfect.  After showers, I spring for Chinese food on the town and we relax after a hard day. 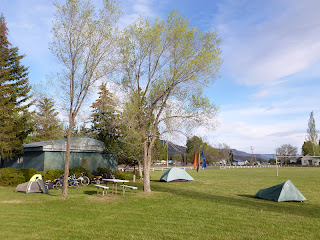 Posted by Scott Wayland at 9:55 AM