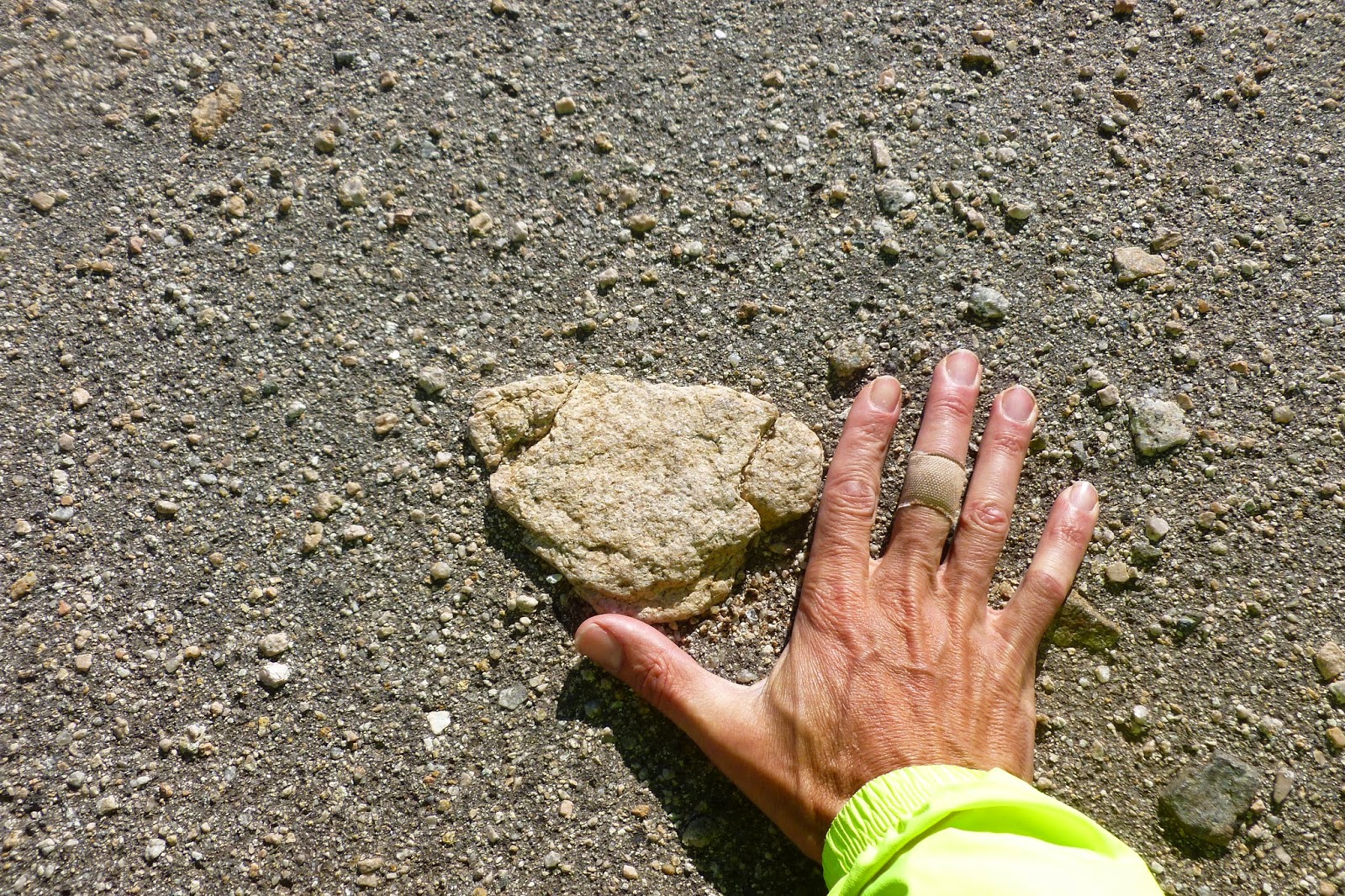 Dec. 25th--All I want for Christmas is some gnarly road surface...

Epic chip seal led to boulder seal and the surreal outside edge of what could possibly be called "pavement."  Powerful tailwinds, massive dust storms to the north and west, clear skies in the high country to the south and east, our general direction of travel.  We'd take it.  We'd suffer, too, but the winds helped, no doubt.

Except for one short run, Django walked and trotted, often off leash, most of the day.  One happy hound, let me tell you.  One happy hound.  We slogged slow and steady up the endless incline, the wind helping us overcome what we'd previously called "Whoop Ass Pass"--not steep, but the pavement featured above gives you a sense for what we had to ride over.

Late in the climb we all snacked and lay down in the lee of a small rise of earth and dense creosote bushes so we could rest out of the wind.  While riding, the invisible force was at our backs, helping, less noisy, our bodies warm in the sun.  Once we stopped and stood up, wind chill set in and we looked for shelter when we could, our flags bent over, the sound most impressive.  As we started to get up from our rest, Django looked over to the rig and let out a big dog bark.  We followed Django's lead, and there he was (cue Sam Elliot Western drawl here), the Lone Hombre.  Dressed in a black down jacket, black riding pants, black cowboy hat snapped up on one side Australian style, black gloves holding up a black bike with bulging black panniers, black water bags filling the front low-riders, the dark-eyed man with black beard glanced at us then returned his attention to the tandem trike, trying to make sense of the thing, knocking it around in his head with an expression that revealed no connections:  What the hell are you folks riding here, anyway? he seemed to be saying, convinced, perhaps, we'd just stepped off a Martian flying disc.  He asked if we'd made it.  I explained a little.  He was a man of few words, fitting for the Lone Hombre, but we pulled from him that he'd been riding the Mojave Road, sticking to dirt mostly, and to fight the headwinds more efficiently, he was headed down the grade "to a place where I can hide out," he said.  Mostly he just stared.  Our hope for a little conversation died in the gale, so we wished him well and set off again for the summit, still out of sight, the Lone Hombre retreating into the distance.

After the usual hours of grinding it out (there's a life lesson here, kids), we made the summit.  Too cold and windy for lunch, we locked and loaded and pushed off for Kelso, a thousand feet below, give or take.  Dodging chuckholes, losing a Kleen Kanteen, loosening teeth, we fought our way down--not an easy descent at speed.  At the beautifully restored Kelso Depot, we parked up against the abandoned P.O., tucked out of the wind, and chowed down hard, then napped in the meager but welcome warmth, the tamarisks thrashing and roaring above.  We lingered for a couple of hours, hoping the wind would exhaust itself.  Besides, we had only a few miles to go for camp, so there was no hurry.  Finally it was time.  We loaded up heavy with water and set out for camp in the long light of the afternoon.  As if on cue, the wind slowly subsided.  By the time we'd pitched camp, it had moved on, leaving us alone and quiet beneath the Providence Mountains.  A merry Christmas indeed. 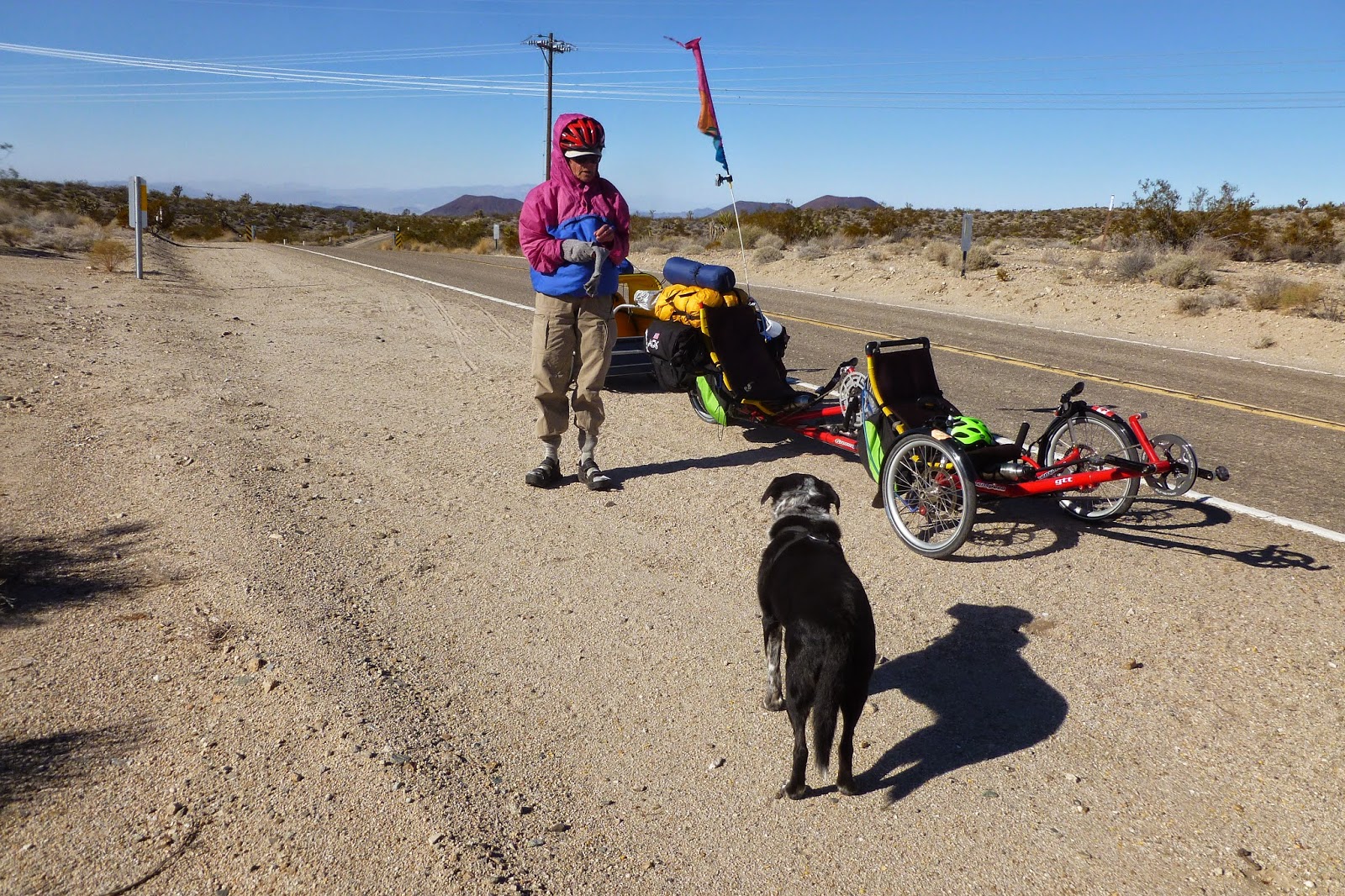 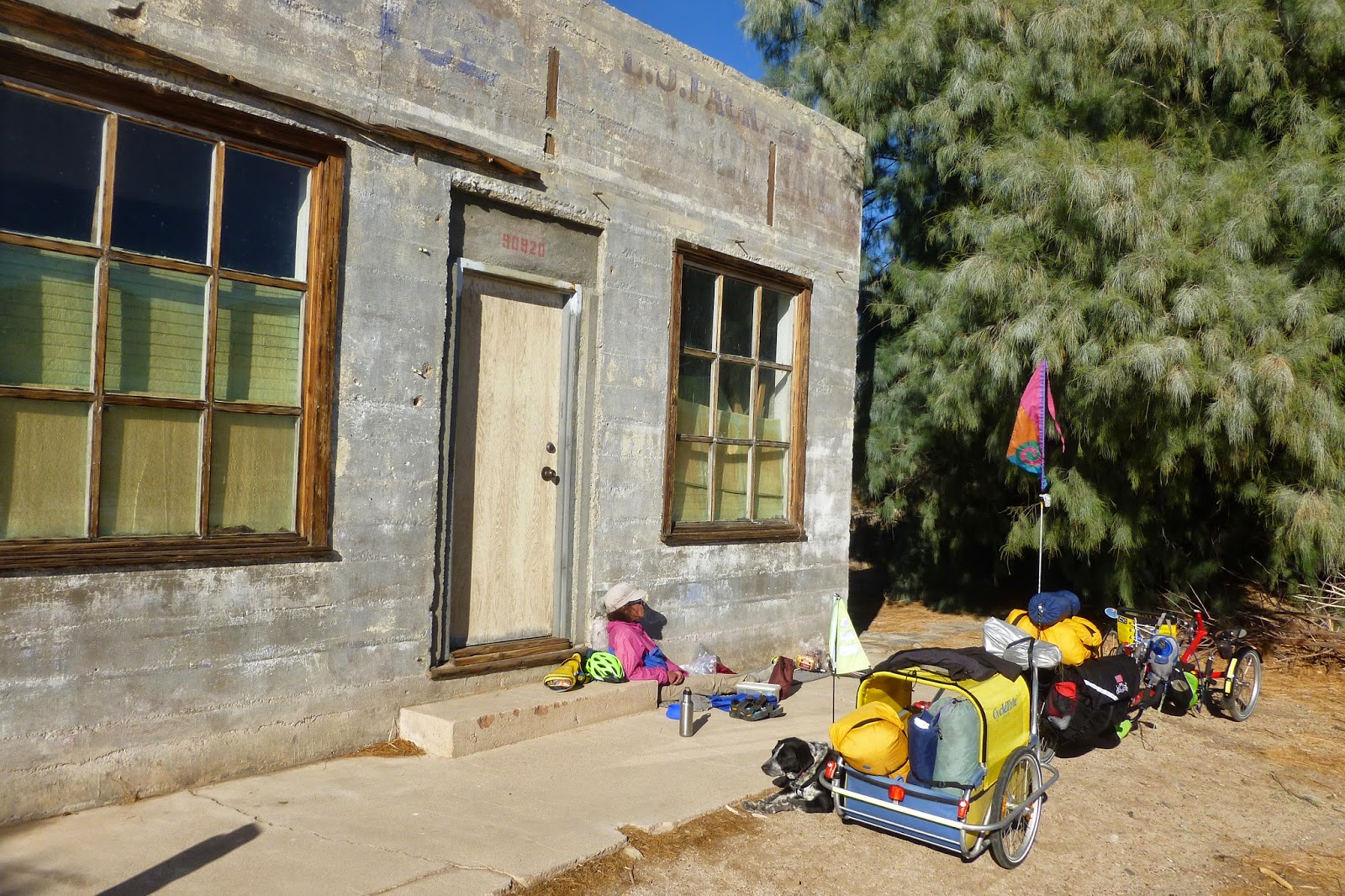 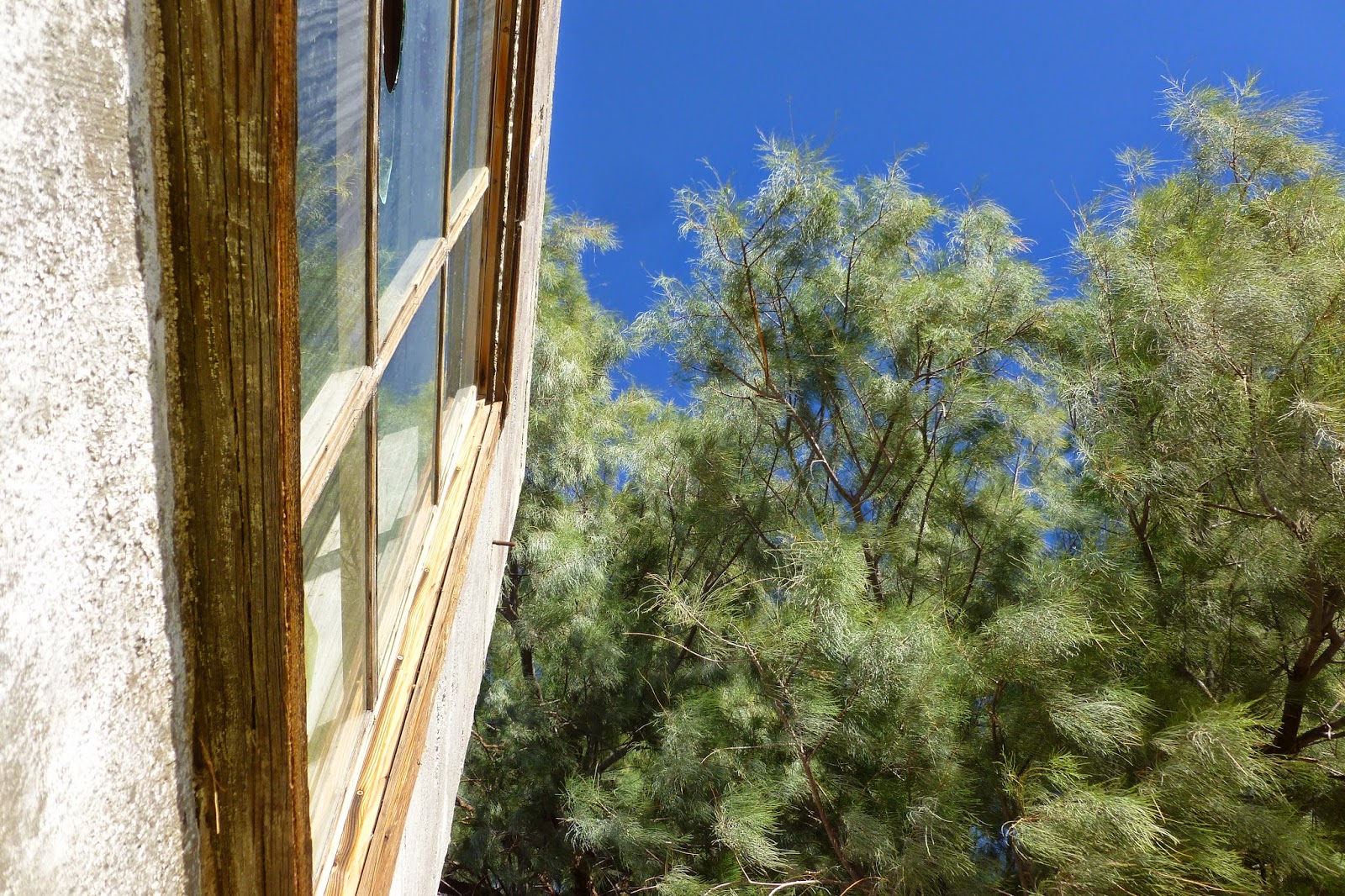 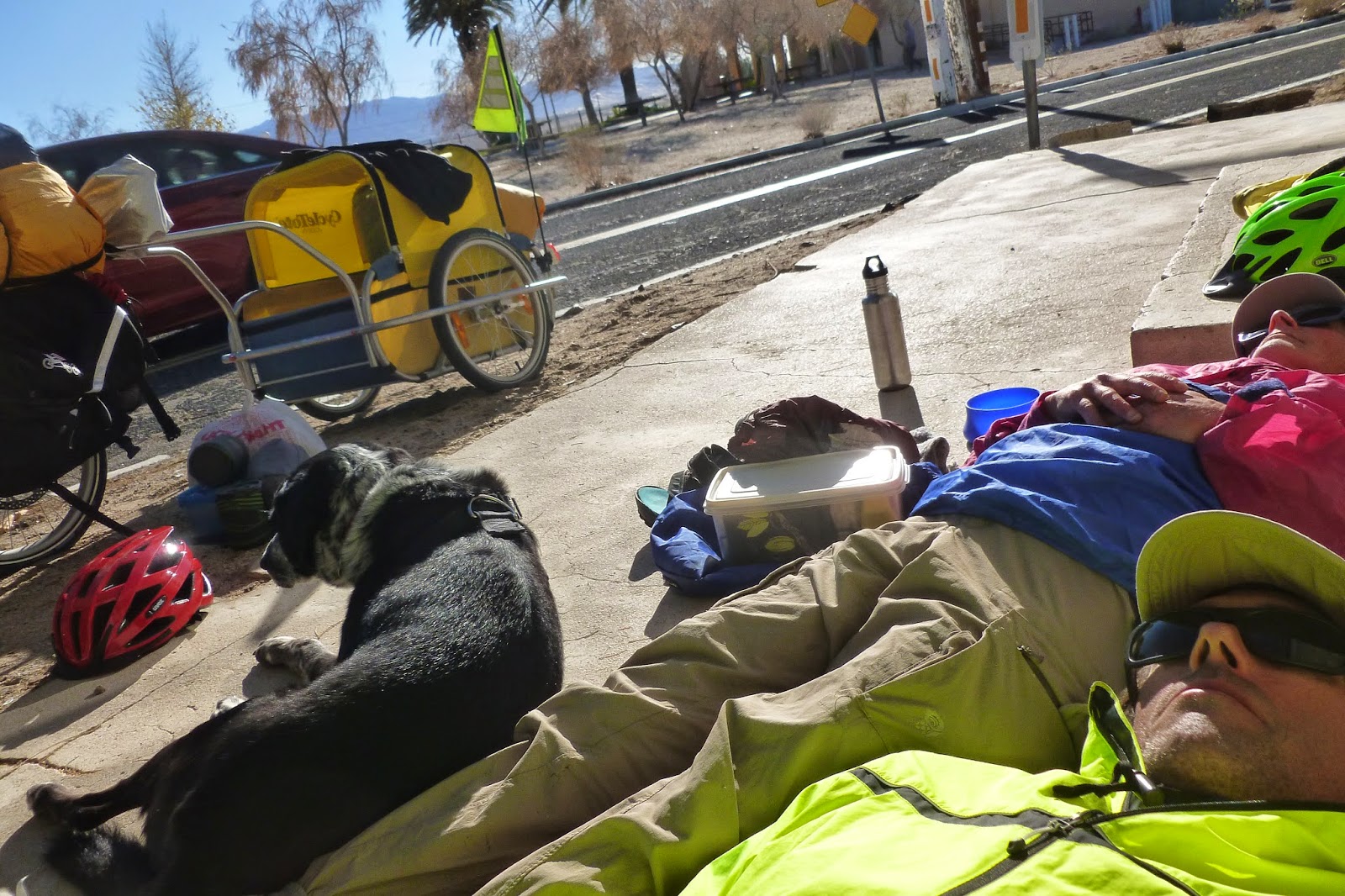 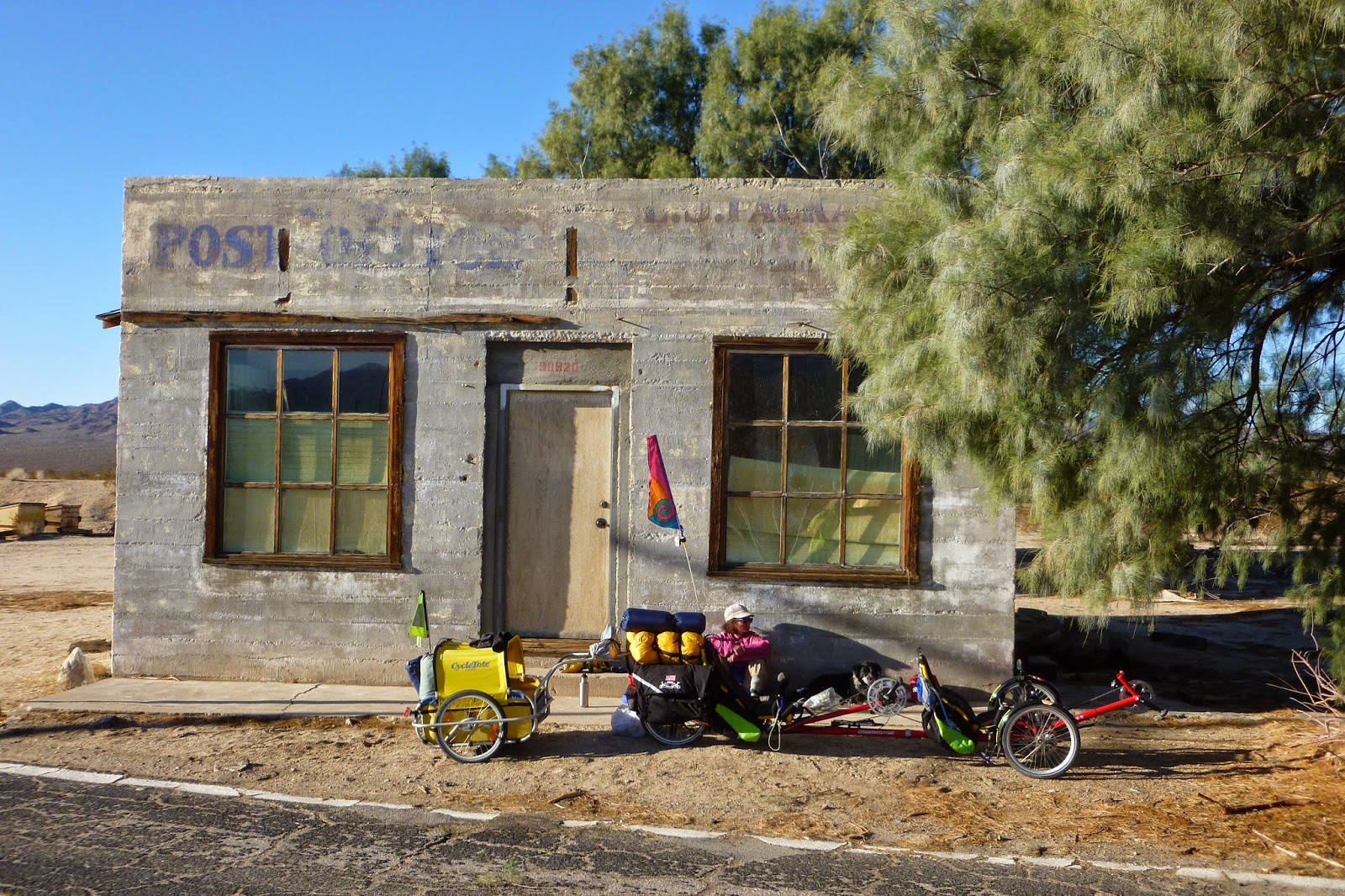 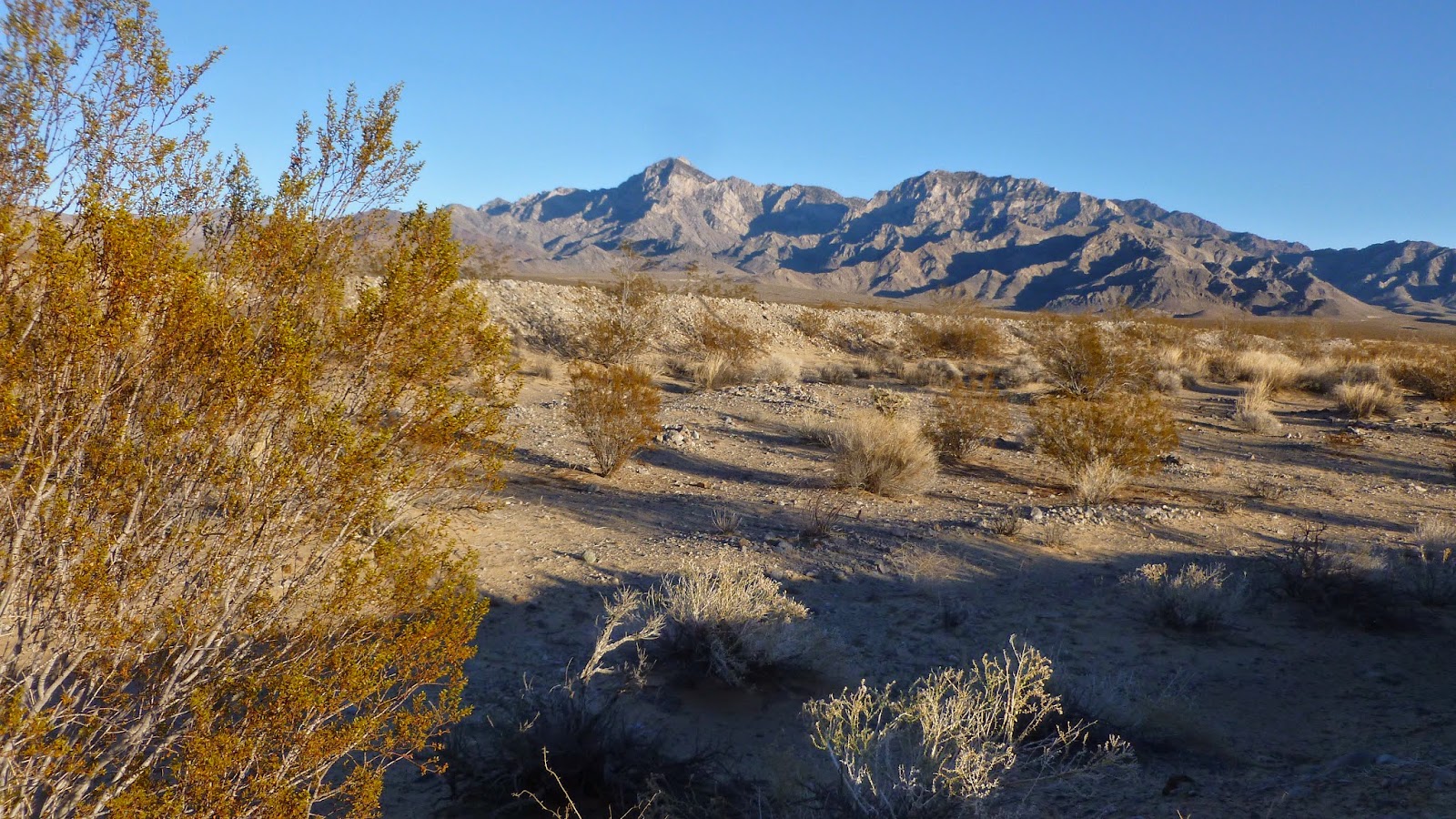 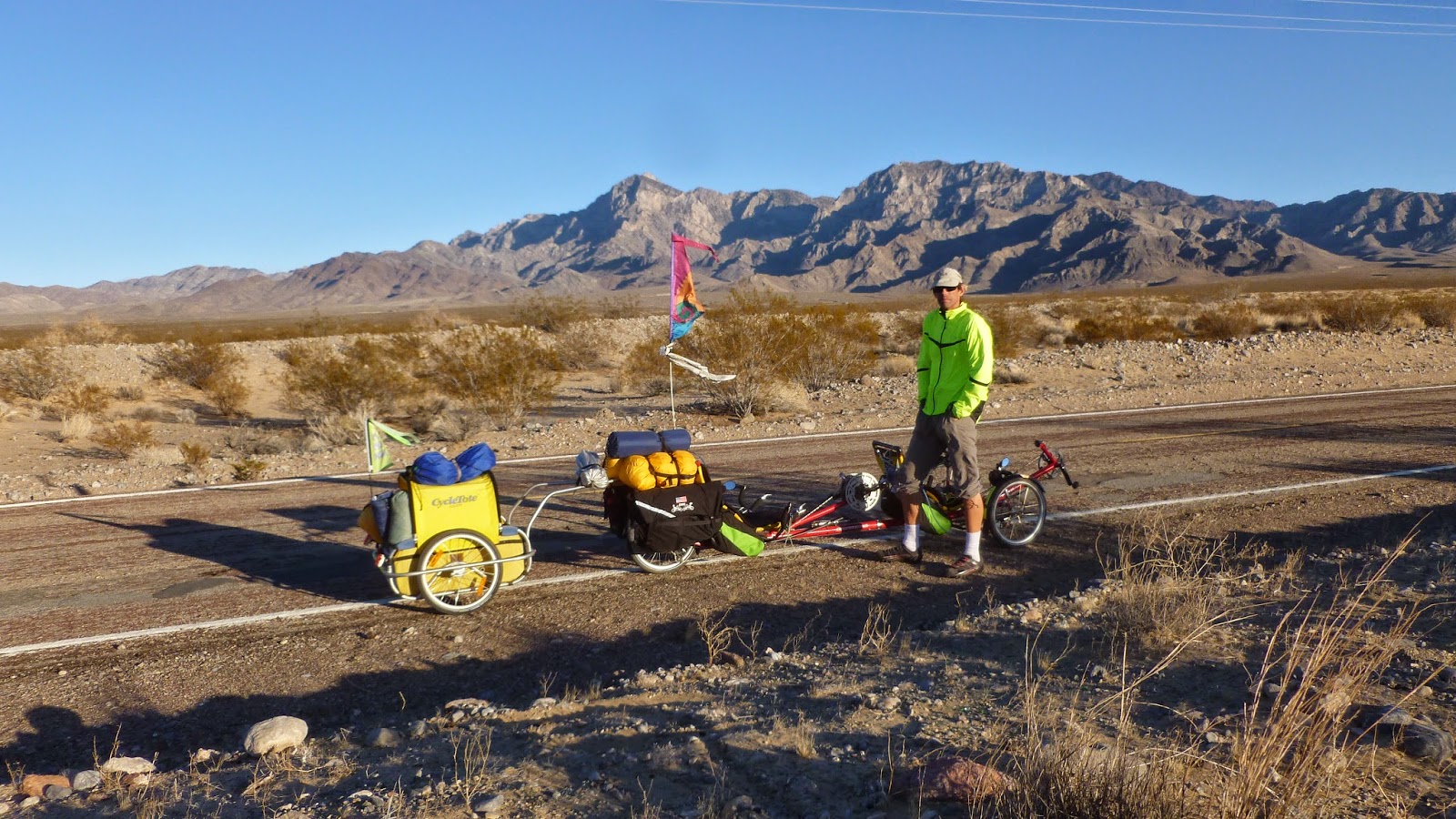 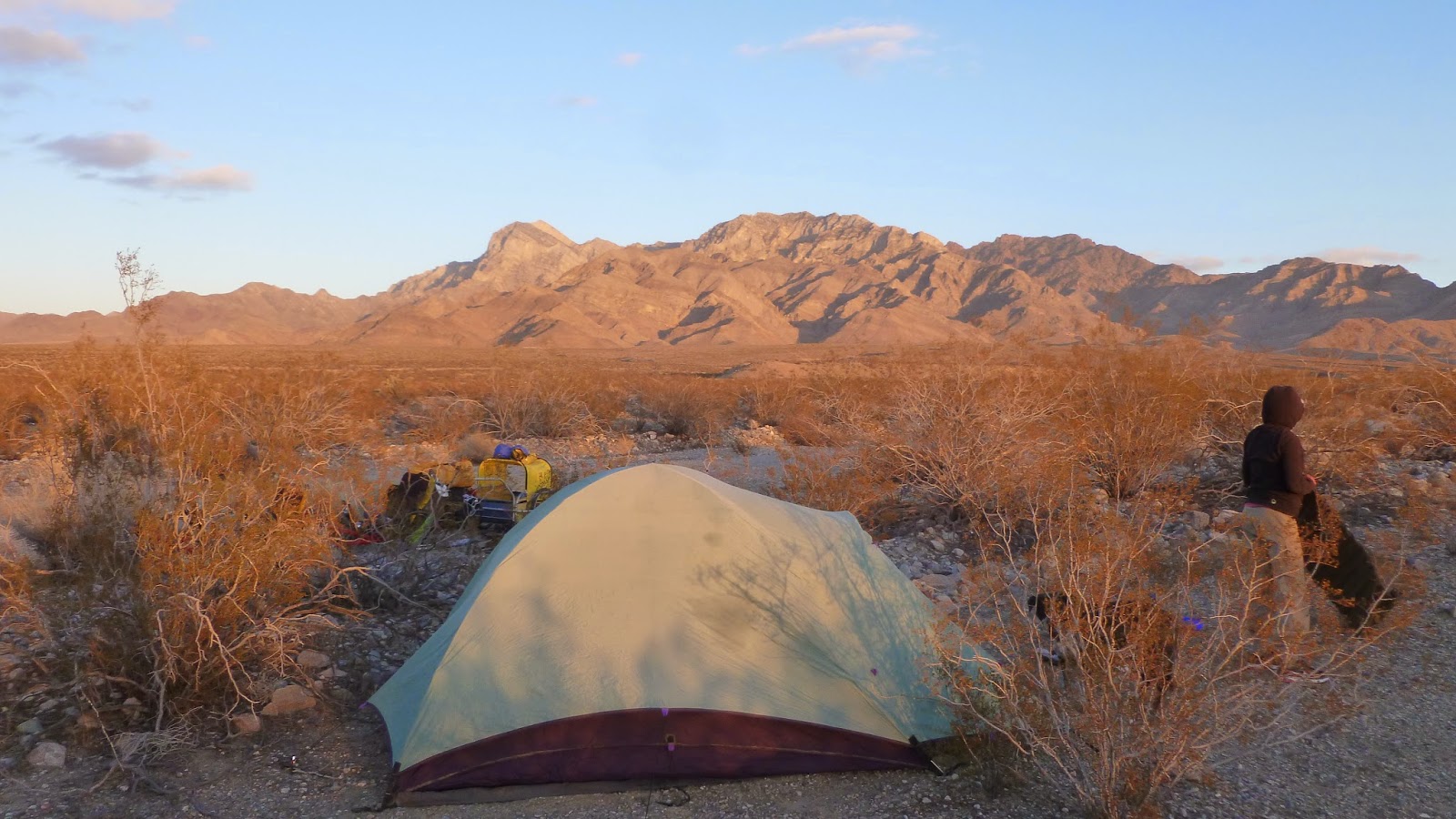 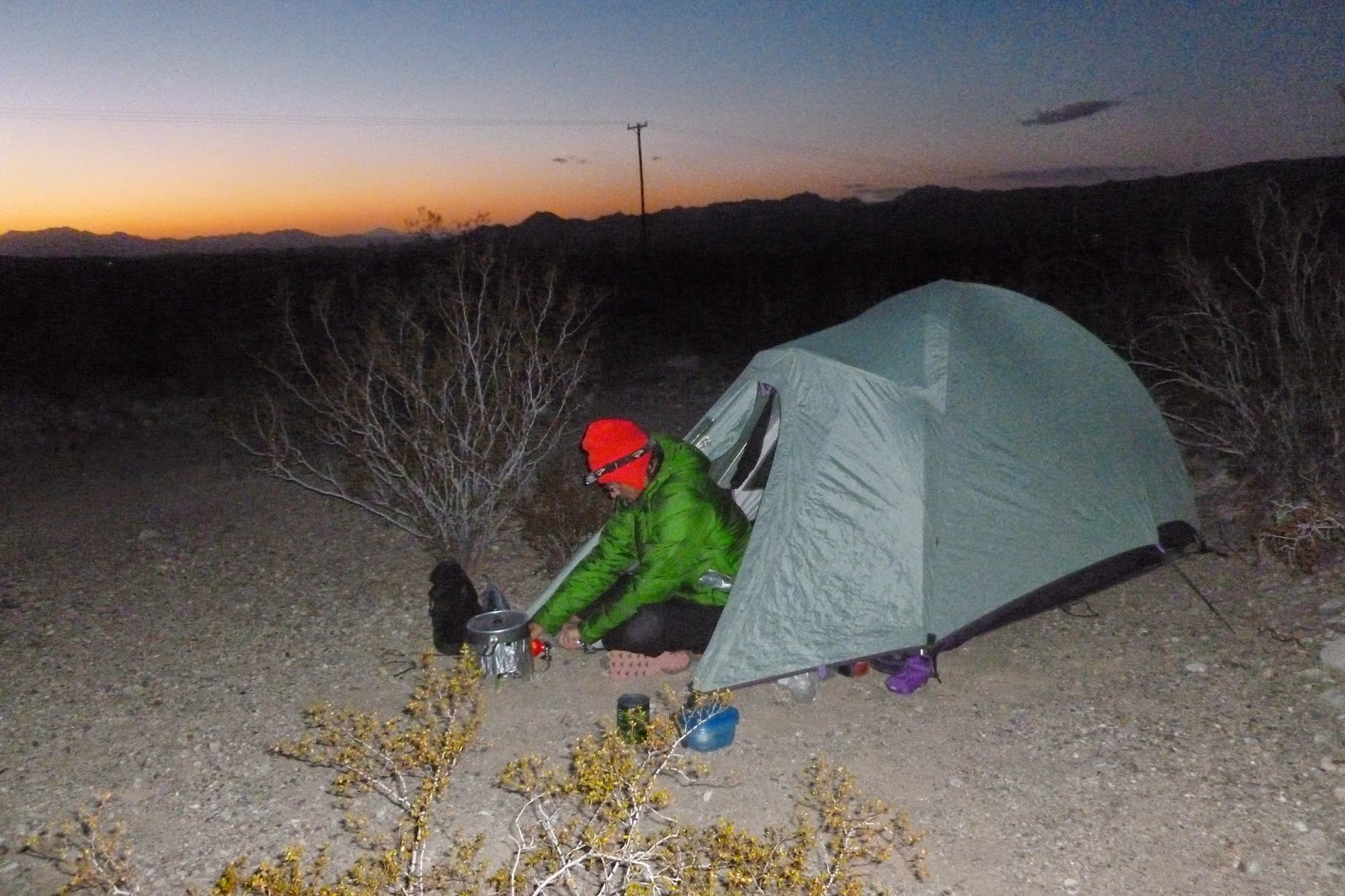