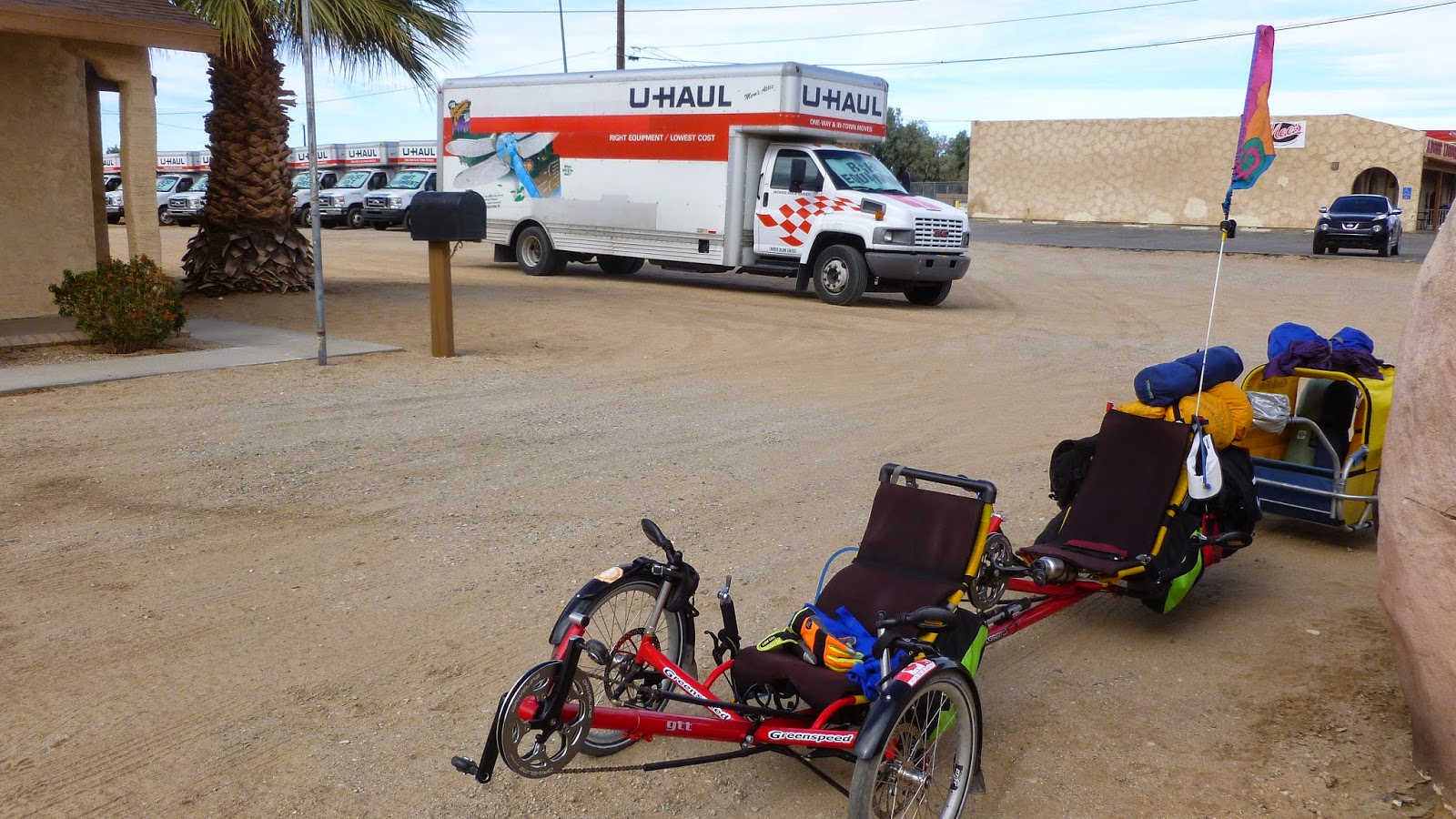 Twenty-eight degrees Fahrenheit, windless, ice in the doggie bowl, coldest morning of the tour.  Clear at first, high clouds began moving in as we packed.  The day would hardly climb out of the 40's.  We pushed and dragged everything through the sand, back onto the firm tarmac, and suited up heavily for a short, fast drop into the Wonder Valley.  This was the longest short descent of the tour, our faces freezing hard, fingers going numb.  At last we bottomed out and began the long slog on a generally slow climbing route to Twentynine Palms.  We slowly warmed with the effort.  Amazingly, we had no wind, nothing to hold us back but the occasionally rough pavement and the pull of gravity on low percentage climbing.  As a result, even with Bone Head in the trailer, we managed nearly 9 mph for the day.  We pushed steadily, taking in the big sky, Mt. San Gorgonio snow-capped in the distance, the sun occasionally breaking through bands of grey.  Once, we let Django walk a few paces after a break, and it was painfully clear to the assembled crew that he was in no shape to hike the big passes in the park, not for a number of days anyway.

By 11AM, we entered town, turned left and ran immediately into a UHaul dealership.  But it was Sunday.  But they were open.  God speaks and we listen.  Folks, the pedaling portion of this tour was over.  Good thing, too.  A brutally steep hill blocked our access to the section of town nearer the highway and our motel.   The super-friendly employee invited us into the building, thinking at first we wanted only to warm up.  Aye, that we did, but we wanted to give him the business even more, although we were happy to linger in front of the wall heater while he worked the computer.  Before long we were loaded and driving, human powered no more, just a couple of schlubs and their hound in a UHaul.  A couple of very happy schlubs.  And we were to be happier still when we rolled into Joshua Tree the next day to our vacation rental.

In Twentynine, however, we spent a great night in a motel fashioned from a converted condo complex.  It was far back from the highway and nestled in a quiet neighborhood, absolutely perfect--Sunnyvale Garden Suites.  On checking the weather forecast that afternoon, we discovered yet another reason we wouldn't be cycling through the park: A major winter storm was moving in.  At least we could get in one night at the rental.  For the first night in two weeks, we fell into a real, actual bed. 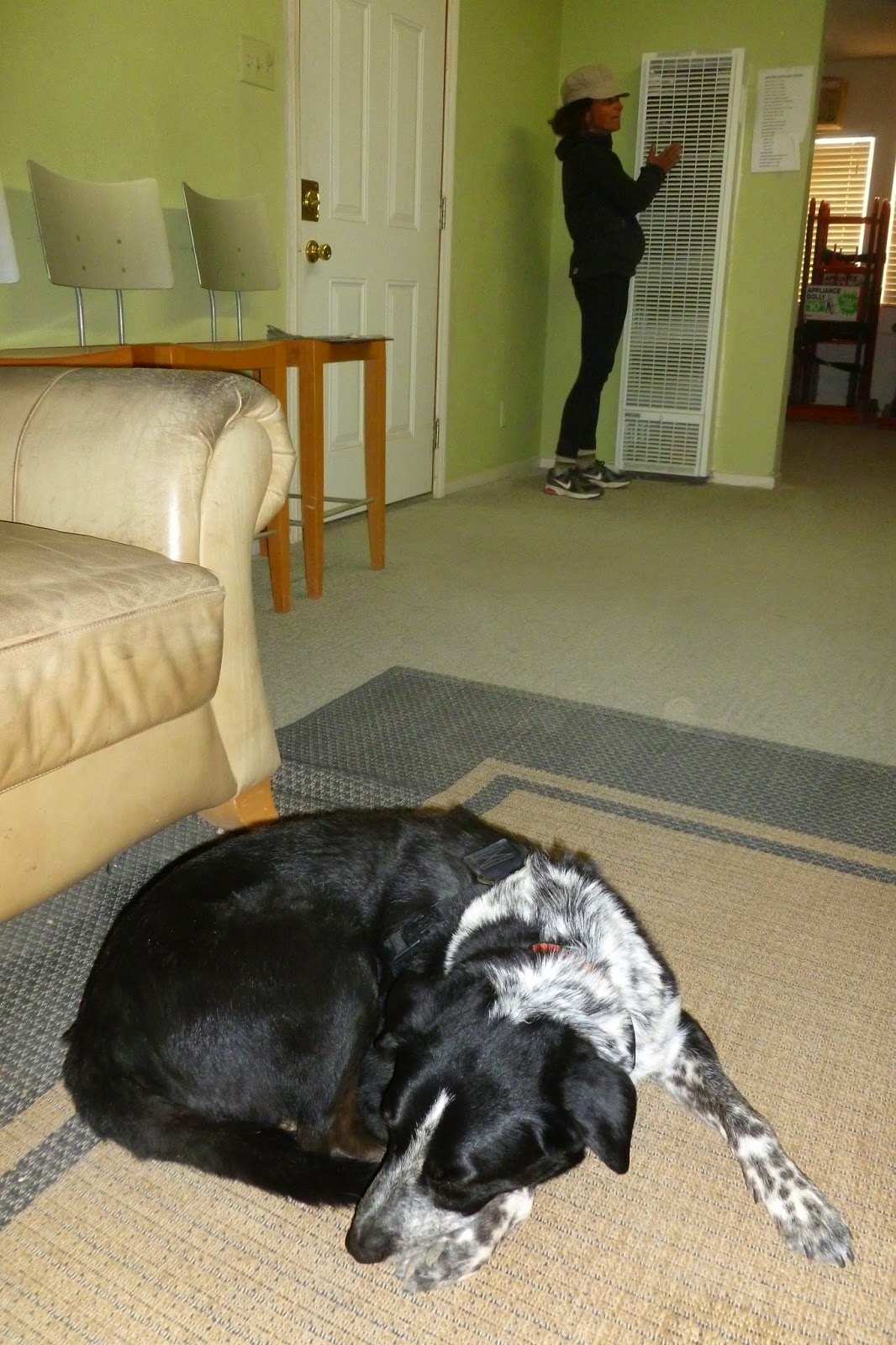 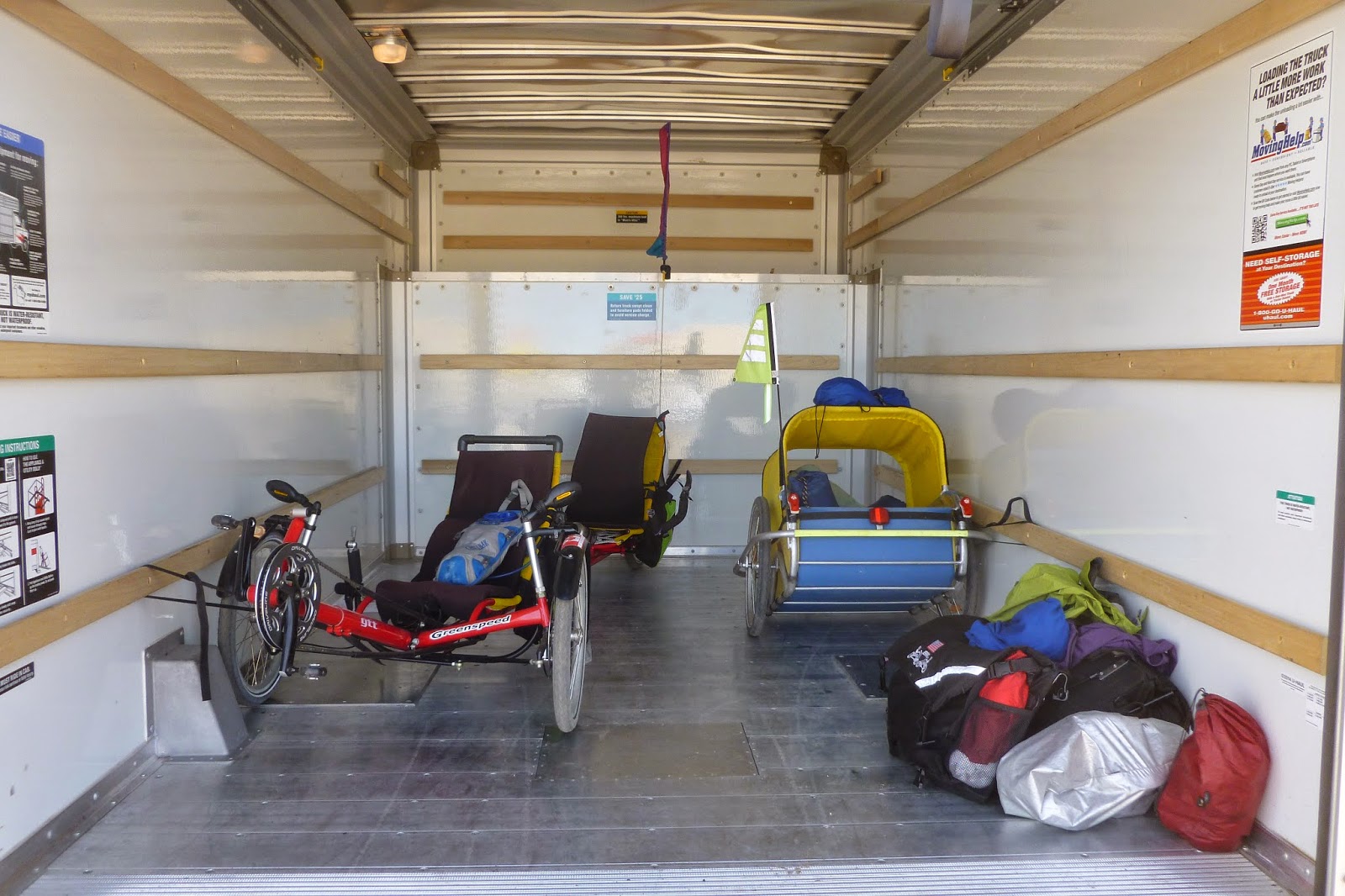