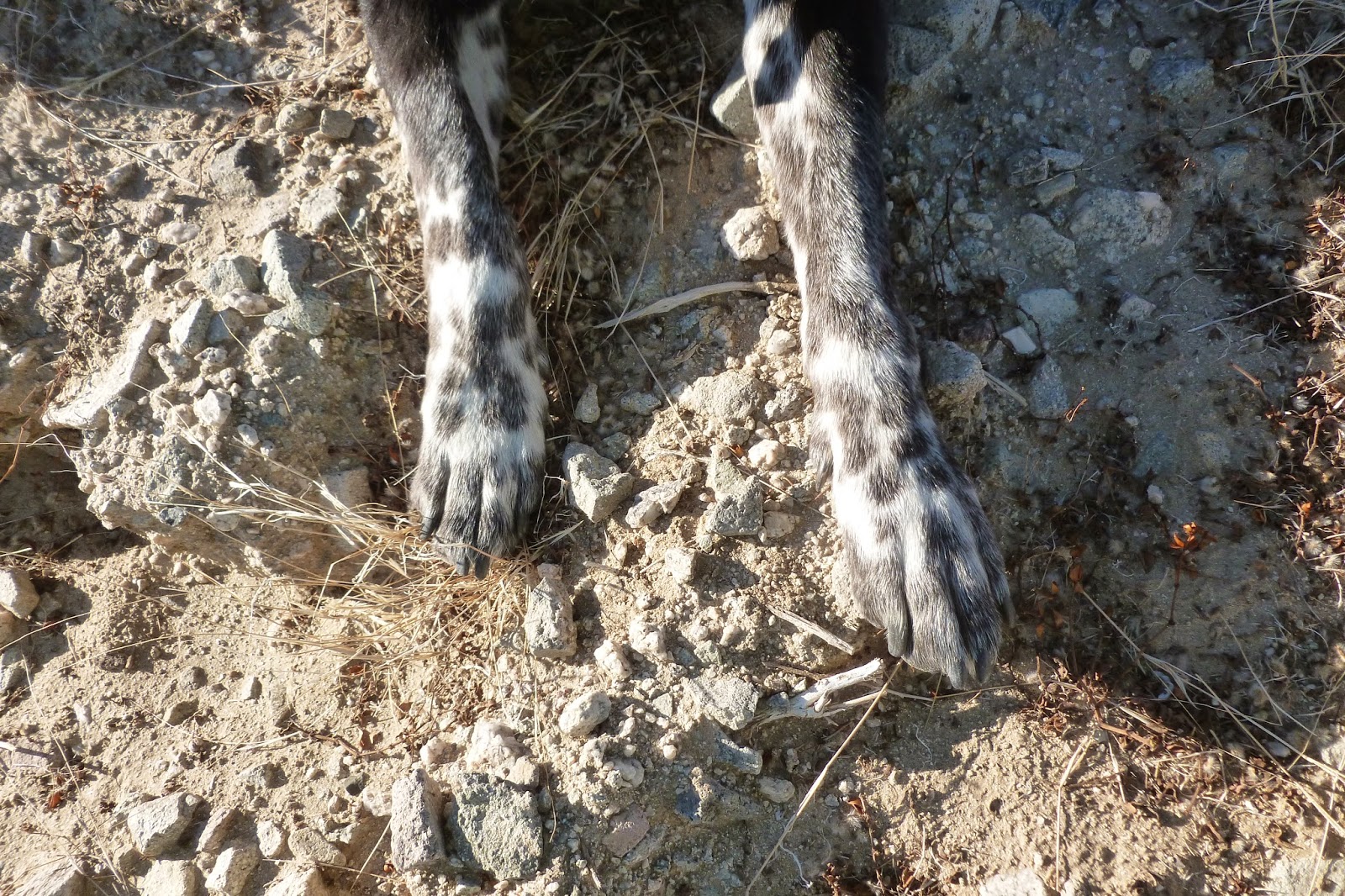 We spent a good night and crawled out into the dark thirty, a pale back-light to the mountains dozens of miles to the east.  As the sun rose, the stove roaring merrily, it became clear that our worries about Django's paws were well founded.  He didn't want to walk, and when he did, he limped along most piteously.  Not good.  We contemplated our options, and I kept circling back to hitchhiking to Twentynine Palms and getting a UHaul.  Jodi, bless her fierce soul, said she'd get out and push if we had to.  We were going to bust this summit sore paws or no.  Twenty miles away, almost 2,000 ft. above us, that big climb was going to go down with an extra 55 lbs. on board.  I looked at her and asked about her resolve to push: "Even ten miles?"

"If I have to," she replied with conviction.

Okay then.  As Jodi said, "We have to be the heroes today."  Well, let's get after it and haul the wounded prince up into those Sheephole Mountains.  We knew the next day would have comparatively little climbing, so if we could bust this pass, we could get him all the way to Twentynine Palms.  Two full rest days would do the trick, wouldn't it?

We got down to business, fighting a cold crosswind, then flying on a downstream ripper when the road took the line of our desires.  We blasted ten miles in nothing flat--for us, that is.  A sandy wasteland reached to the northeast, dark volcanic peaks breaking through a tawny, sandy ocean.  Ahead, the Sheephole Mtns. cut the skyline with fearsome granite crags, a ripsaw ridge against a bright December sky.

The flat portion of the ride had to end, and eventually a very gradual ramp started, leading in a heart breaking line straight up to the pass, every long, slow, stinking mile laid out for us to contemplate, one slow rotation of the spokes after another.  But at first we climbed quickly, 5--6 mph.  Still, we'd see a car crest the pass so far ahead, zooming down at 70 mph, and it would take long, long minutes to reach us.  What these sonsabitches were covering in minutes we'd be beating ourselves for hours to cross--hard, sweaty effort regardless of the load, but we'd plopped an extra 55 lbs. of grinning, floppy-eared love dog into the trailer for good measure.  Fortunately, all the previous climbs of the tour had battle-hardened us.  We geared down, got up, pumping pistons of righteous ascent flailing against the pedals.

Somehow we did it.  We didn't even need our lowest gear, even up the 8% headwall crux.  We were, frankly, astonished.  We were tired but not shattered.  Triumphant was the prevailing mood.  We pulled over the top and began scouting for camp.  Back in '09 we'd portaged gear back into a small canyon--a real chore but a good camp.  I left Jodi with Django at the rig and wandered down the road, trying to find the access point.  On the way, however, I spotted a dirt road on the other side that led down.  Ah, this could work--and no epic portage.  As I hiked back to Jodi and Django, a couple of young guys in a black Charger pulled alongside and asked if I needed any help.  "Well, we could use a little extra water,"  I said, thinking about Jodi's idea to hit up an RV.  "Nothing life or death, but it would help."

"Yeah, sure!" the driver said, and the passenger reached back for a couple of pints of bottled water.  The kindness of strangers.  Thanks, guys.  We had coffee the next morning because of you.

We pushed, dragged, and rolled down to a spot out of sight below the road to camp, not as nice as the other canyon but a hell of a lot less effort.  The wind slowly died away, the sun sinking behind a rough granite ridge.  We ate a "dry" dinner to conserve water, a replay of lunch, and settled into the tent.  I hoped, hoped, hoped the wind would be kind to us.  On our previous ride, we'd taken a terrible beating on the run to Twentynine Palms.  Regardless, we'd get showers, a room, dinner out tomorrow--yes.

In my heart, however, I wondered if tomorrow would be the last day of riding, maybe the next to Joshua Tree.  We were both having doubts about Django's recovery, and I was having doubts about riding through Joshua Tree National Park over the New Year holiday.  It was likely to be a total zoo.  For now we had a quiet camp.  That was enough. 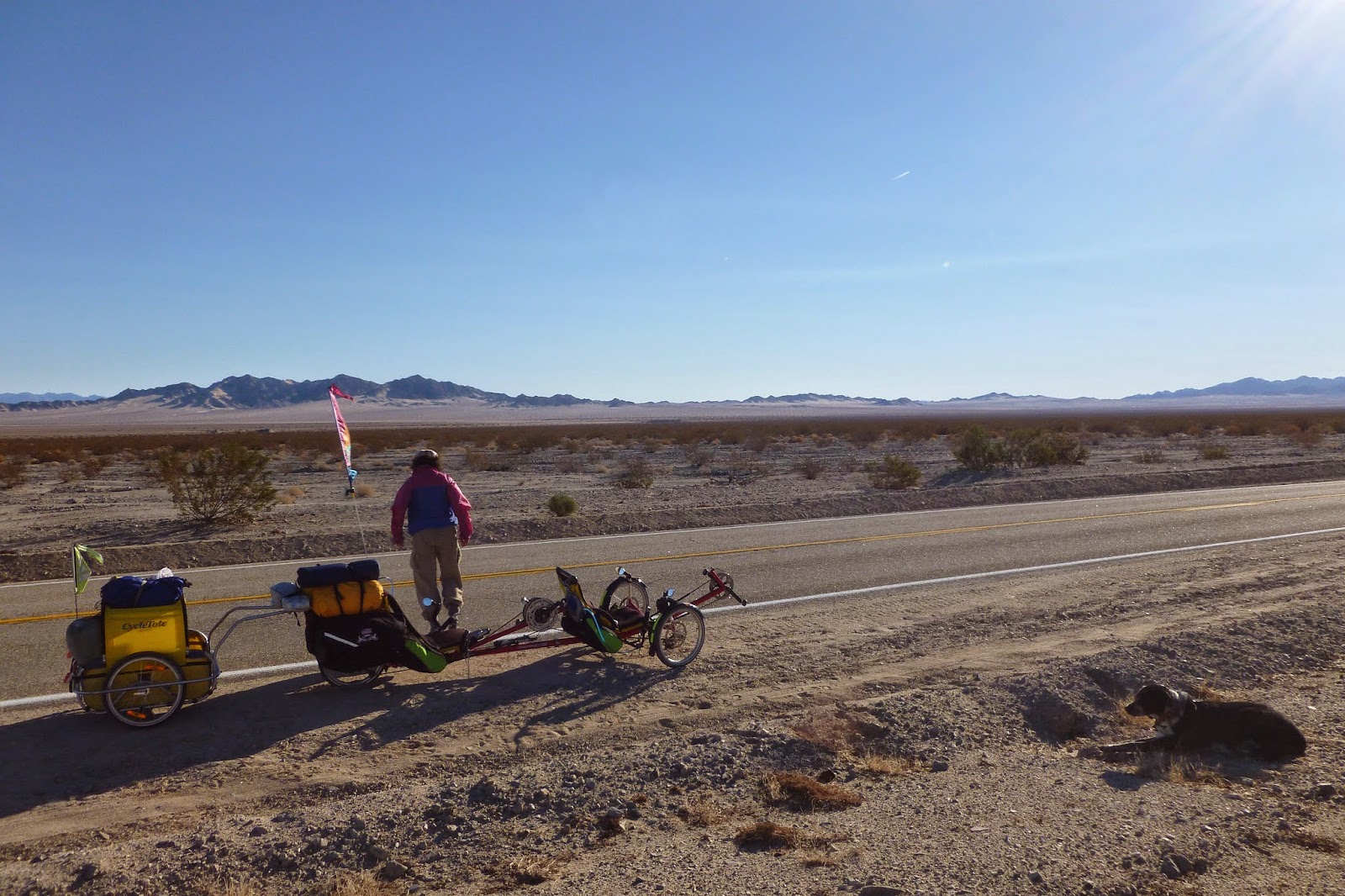 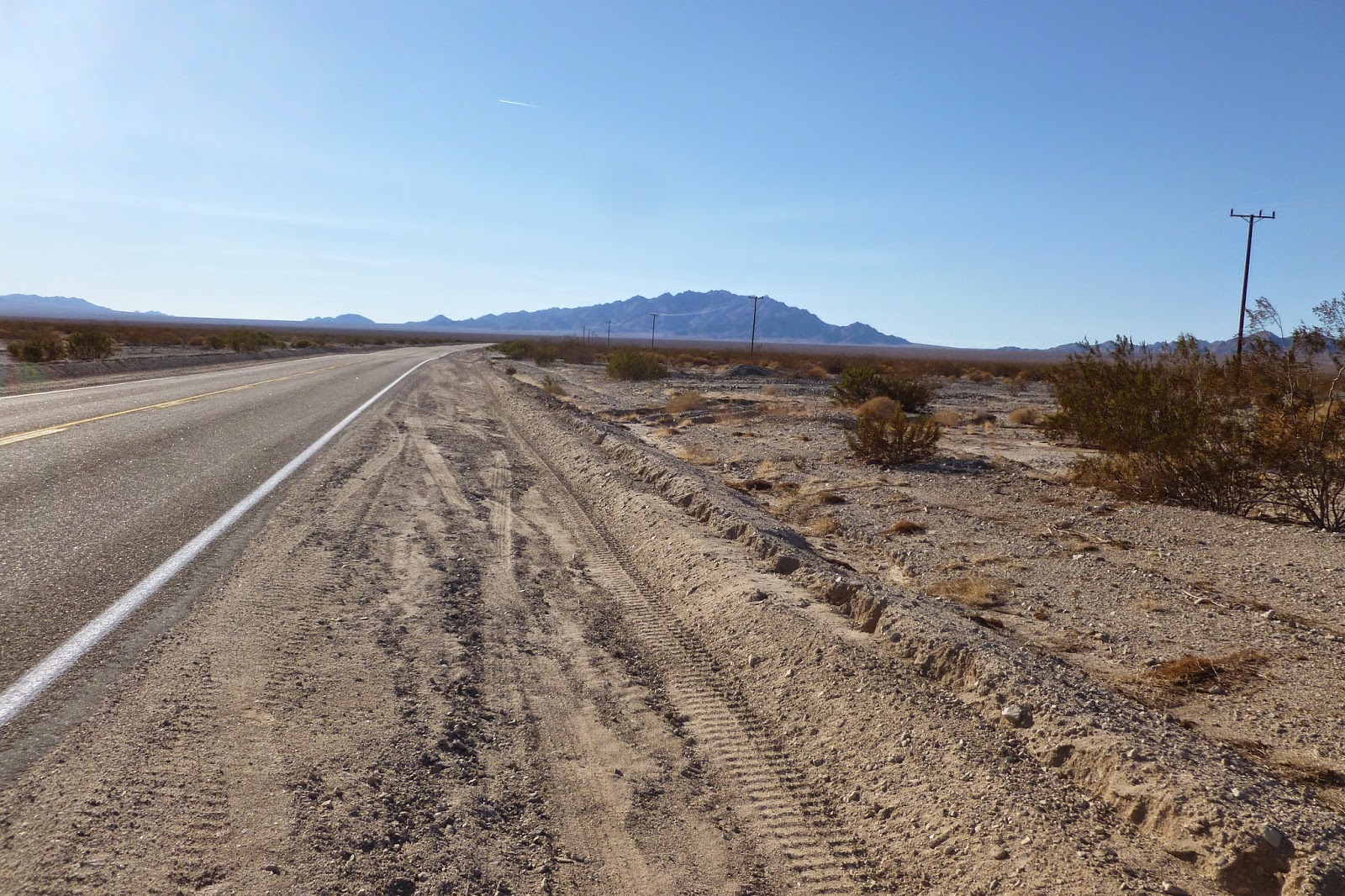 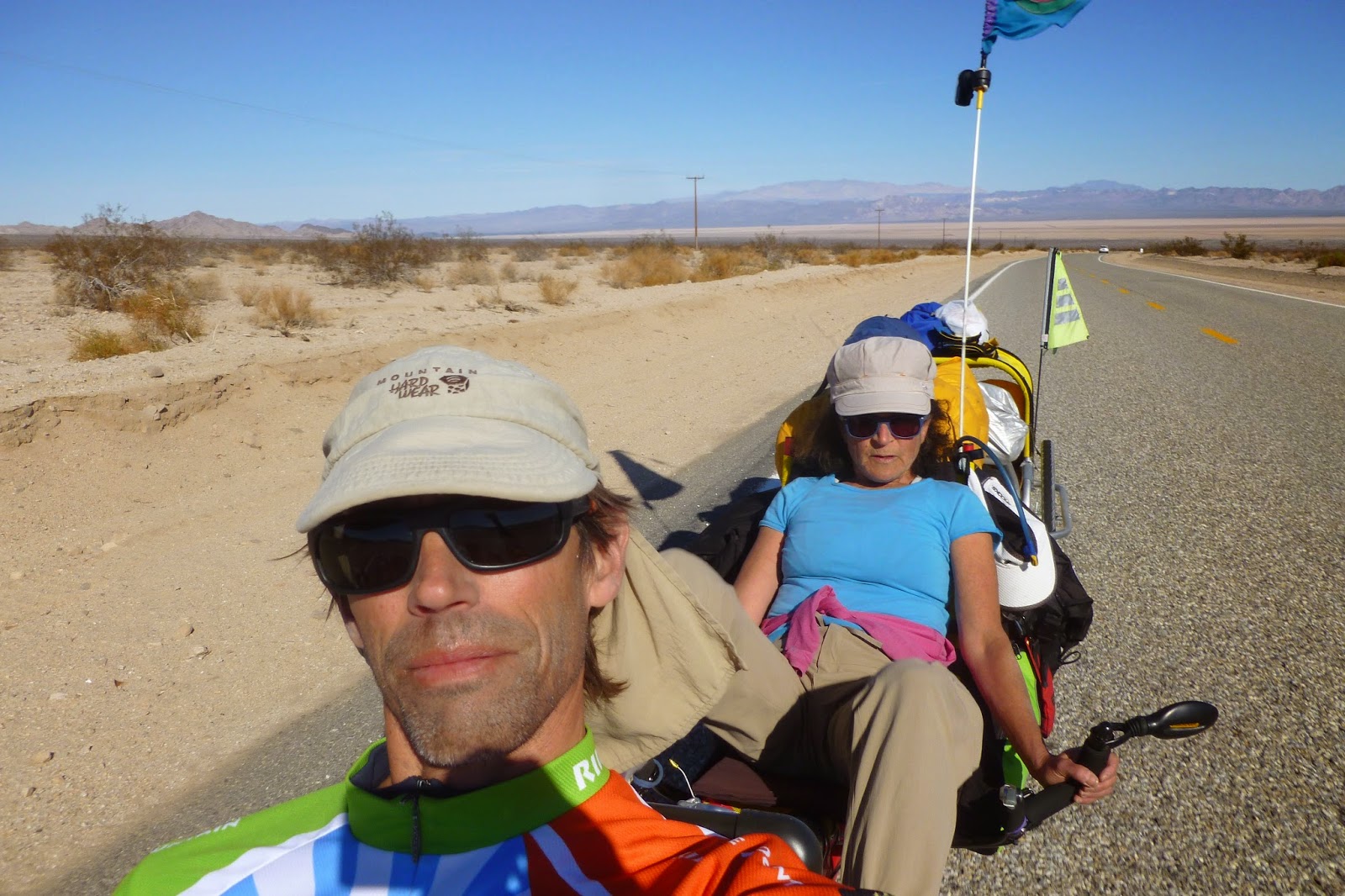 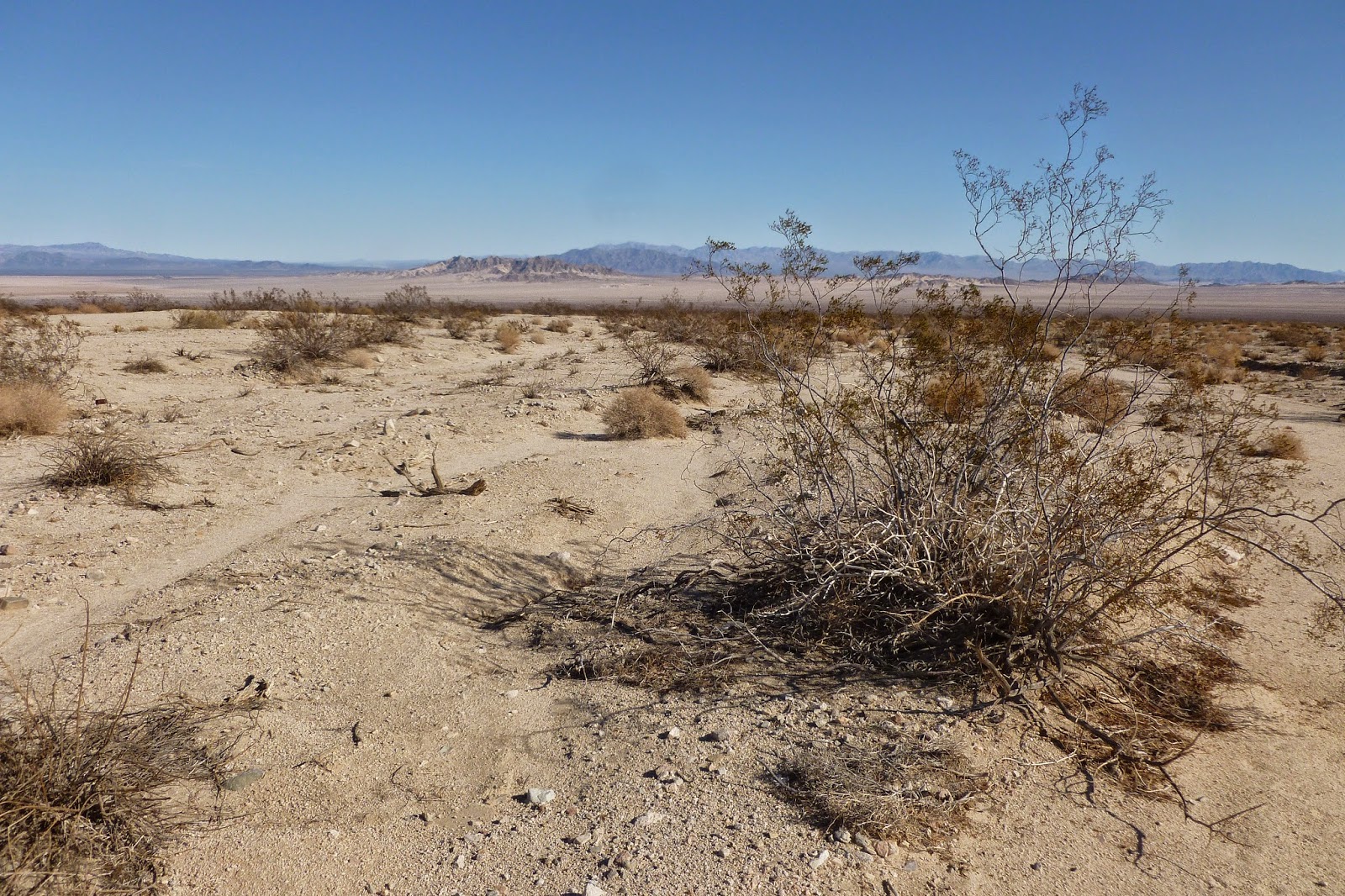 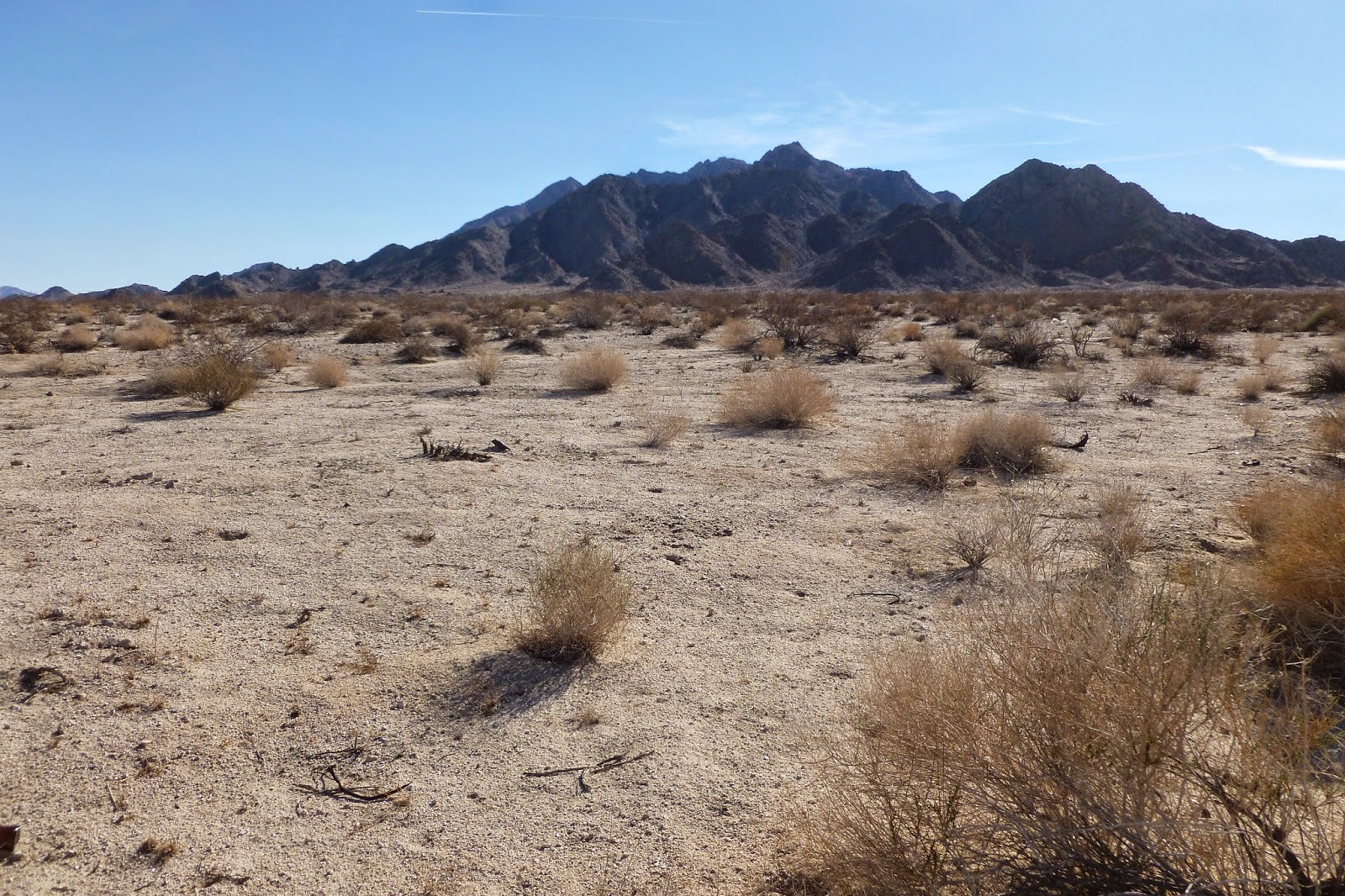 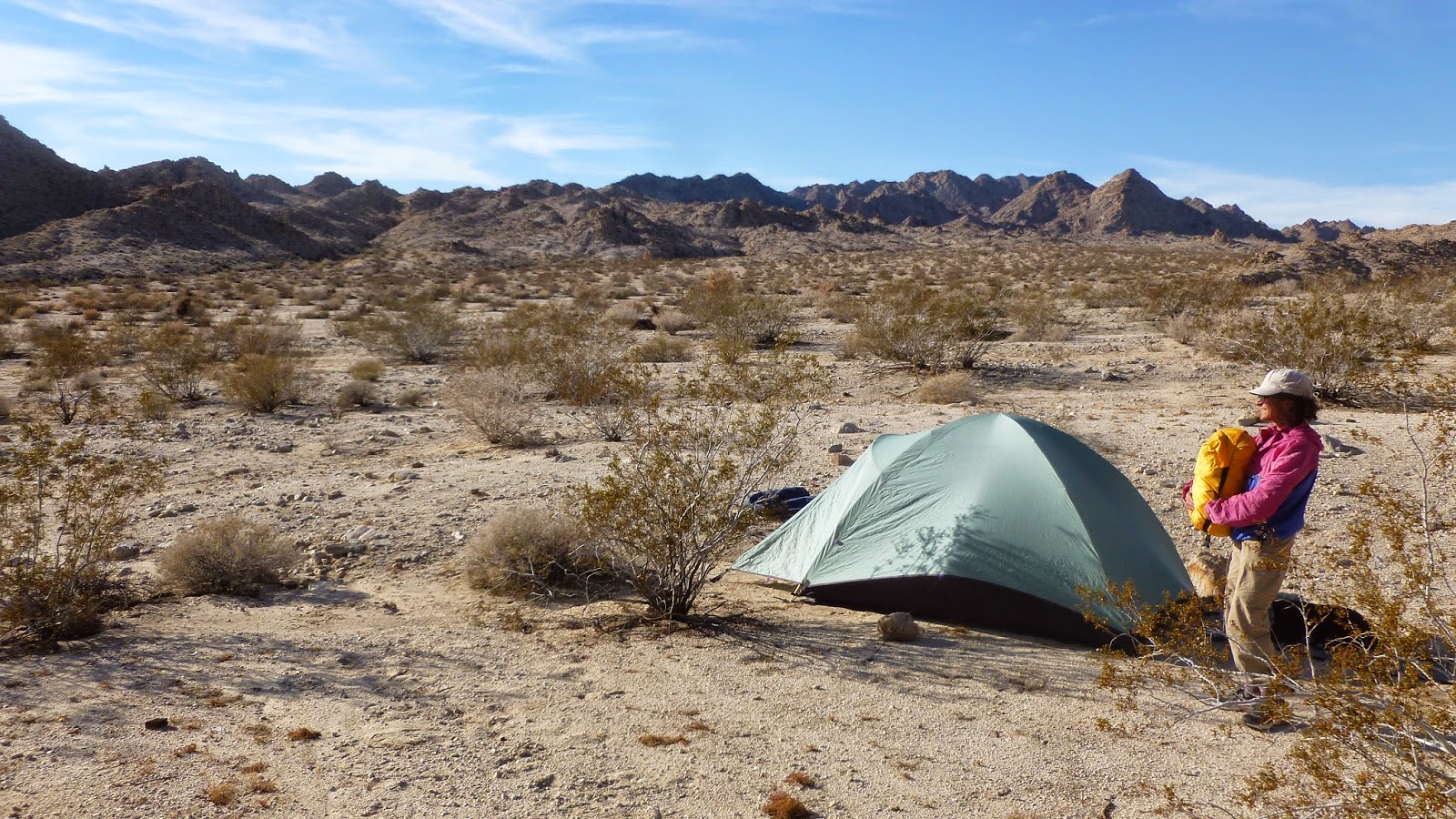 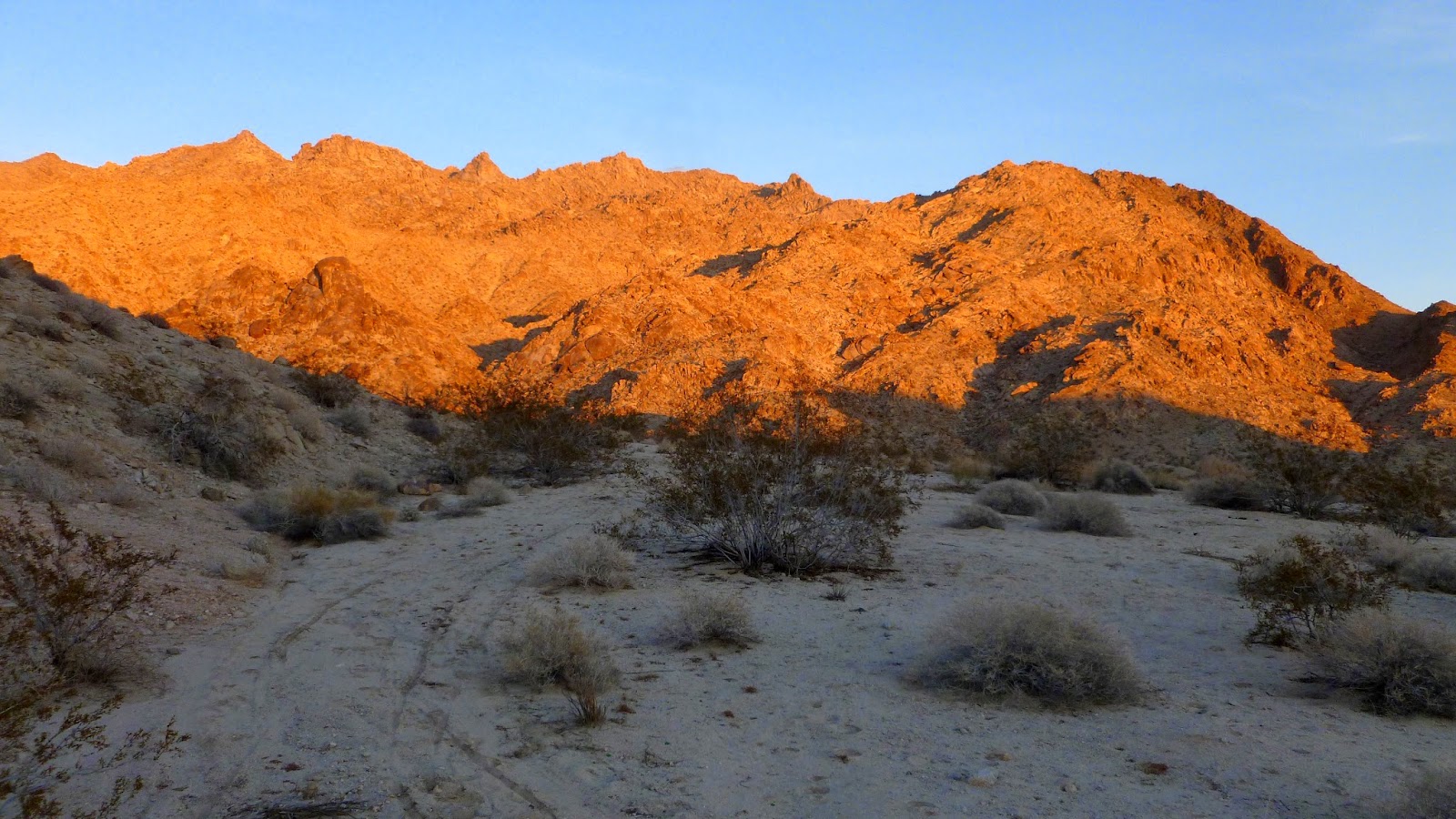